Chareau, a California Aloe Liqueur, is Kurt Charron’s attempt to bottle the terrior of the agricultural lands of Southern California.  Situated in Camarillo, California, (directly north of Thousand Oaks and a 45 minute drive from Los Angeles) it sits in an office park completely surrounded by agricultural land.

Hawaii Beverage Guide had the opportunity to visit the distillery and chat with Kurt Charron, founder and Master Distiller of Chareau, to gain more insight.

<
>
Origin Story
Chareau was founded to fill the void of Liqueurs amongst the crop of craft gin and whisky distilleries that have been sprouting up.  According to Charron, “For most distilleries, Liqueurs were an afterthought. Everyone wanted [to create] whiskey distilleries or gin distilleries, and would have the occasional liqueur, bu only in the tasting room.  I wanted to focus on liqueur because it was a category no one was paying attention to, and I’m glad I did.”

“I wanted to capture Southern California and a sense of place though flavor profile. Cucumber, mint, melon, lemon were things that were growing all around here.  These were also ingredients (especially cucumber and mint) I was constantly using in cocktails when I was bartending. Melon brightens it [the Liqueur] up a little bit, and we use lemon because we’re surrounded by lemon groves here.  The aloe vera was the final ingredient. In 2010, while on a trip in New York, I had a cocktail with aloe vera juice. The aloe just added something really special. I also wanted to use the aloe vera because it’s definitely in abundance in California.”

​
Brand Name
Chareau is a mash-up of Kurt’s paternal surname, Charron and Maternal surname, Favreau. “When I was a kid, I always saw my family’s dairy trucks with our name on them.  I didn’t want to name my liqueur company Charron; however, I wanted to keep it in the family. So, I took the first three letters of Charron and the last four letters from my maternal side of the family’s name, Favreau, and smashed the two together.”

​
The Team
Charron credits Chareau’s expansion to his brand ambassadors.  Leading his team is Helen Diaz whom he met at Tales of the Cocktail.  The team has expanded since then. “I have six brand ambassadors around the country, and I’ve teamed up with a sales agency of 20 people in the field that currently spans across thirty-six states.  The team we have are in the major markets of Los Angeles, San Francisco, Chicago, New York, Denver, and Austin. [The team] provides education for the trade with staff trainings on cocktail usage.”
The Location
“I love the area we’re in now.  As you drove in, you saw the farms right across the street.  I’m close to all my suppliers, which is really cool. And we have great air quality and great water quality, so it’s the perfect place. I still live in LA, which is about 45 miles from the distillery.  I did that because I felt like that's what’s best for the product.”

“The best place to be is in an agriculture community, and it’s actually the place where a lot of the produce you find in Los Angeles is actually coming from.  I live in Silverlake because of the access to bars and restaurants. Being out here [Silverlake], there’s not a lot going on in the bar and nightlife scene. Professionally, I feel like I need to be near the bars and bartenders in a major city like LA.

Ingredients Sourcing
There is an emphasis on ingredients as Chareau sources ingredients directly from farmers in the local area.  According to Charron, “A lot of stuff we do here isn’t the most efficient, but it creates the best flavor, so we do it anyway.”

Water
Water is filtered through deionization.  Not reverse osmosis.

<
>
Tankers of Muscat Canelli wine, ranging from 11% to 13% ABV, are sent from vineyards in Santa Yenez Valley and are loaded into a 3,200 gallon holding tank.  Unlike the typical Muscat Canelli wine, this is treated with sulfites because it does not need an extended shelf life. To ensure this, Charron works with the farmers throughout the growing year and into production.  The wine is then distilled to create a brandy base of 70% and 80% alcohol.
​
With California being famous for its winemaking and grape growing, Charron knew he wanted to use wine as a base, and he wanted to use something from a nearby wine region.  Picking the specific grape, however, was trial and error. “What I liked about Muscat Canelli was it had this really fruity characteristic, which worked really well for a Liqueur base.  It’s really bright and complemented the other ingredients I was putting in there. It’s also widely available, and something I can get in abundance here in California. There were other veritials like Riesling and Gewurztraminer, but I couldn’t get enough of them.
“We’ll take the base spirit, put it in the still, and actually grind it up to an applesauce-like texture, and put enough cucumbers to fill the still; we’ll let it sit for a couple hours to absorb some of the flavor, then distill it.”

Chareau is currently trying to find a more sustainable usage for their spent cucumbers and they are open to any insight they can get.  On consultation with the of the City of Camarillo, they currently hook up a garbage disposal to a drain because the cucumbers are biodegradable.  According to Charron, “We’re currently trying to figure out what to do with the spent cucumbers. Right now, we literally hook up a garbage disposal to a drain.  Because it’s biodegradable substance, it’s OK to do that because we talked to the city, but I was hoping that there was another more sustainable purpose for them.  I talked to my farmers, as I source everything direct from the farms, but the farmers said that the alcohol in the spent cucumbers would kill their compost pile. Then, I talked to livestock farmers, knowing that a lot of distillers use their spent grains as animal feed, but the livestock farmers didn’t want the spent cucumber.”
Charentais Melon is a type of muskmelon similar to a cantaloupe, but much more aromatic, hence the name.  Before infusing the melon, the outer skin is peeled off. According to Charron, “We probably don’t have to [skin the melon], but for me, with melon specifically, I’ve seen so many bacterial infection scares with melon skin, and I never wanted anything to come back to us. That’s why I just take it off completely.
Whole aloe vera is brought into the distillery where they are laboriously hand filleted and juiced.  According to Charron, “We are an aloe Liqueur because aloe is the dominant ingredient being as there is more aloe than anything else.  I tried distilling the aloe vera, except it’s 97% water, and when I was distilling it, I was just getting distilled water and not a lot of flavors were coming through, so it felt pointless. So, I thought the best way to express aloe vera was with fresh aloe vera juice.”

“By adding the aloe vera juice, I was able to get this really soft mouth feel, which you find in a lot of liqueurs, but they get that from a higher sugar content.  We were able to add half the sugar and do a dryer style of Liqueur, while still mimicking that same mouth feel. It [aloe vera] also adds bitterness and earthy qualities.”

The Still and Still Story

The Still is a 500L Pot Column Hybrid from Arnold Holstein.
Chareau uses the still in two different ways.  According to Charron, “I plan on making different products and use the plates for a couple things, like when I make my base spirit.  But, when infusing the botanicals, I want it to be a regular pot to get as much flavor as possible as I’m not trying to get any rectification at that point.”

Still Story
“I first started distilling on a tabletop still in my kitchen when I was living in LA; I was just making a couple spirits that I liked, but I couldn’t actually manufacture that product for sale.  So, I teamed up with a distillery in Northern California, Saint George Spirits, and I worked with them for about two years. This [Arnold Holstein] was the actual brand that they were using. It’s a German still (solid copper); they’ve been in business for a long time, and I think it’s the best on the market.  When I opened my own distillery, I wanted to use the same equipment This guy [the new Holstein Still] took 18 months to get.”
Chareau is expanding and recently installed a new still.  According to Charron, it took two years from purchasing a new still to its arrival at the distillery. 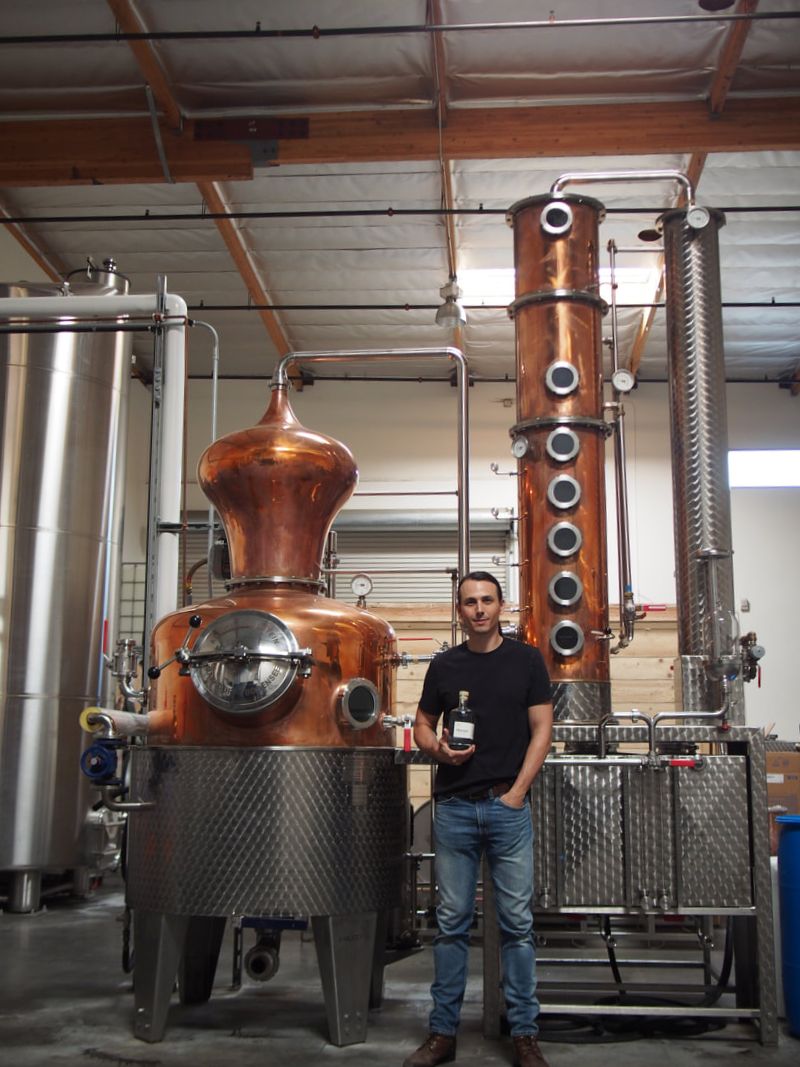 <
>
The base spirit is distilled from Muscat Canelli grapes
Different ingredients are infused separately.
“For the same reason that I like to use local ingredients, I distill things during their harvest time.  Because we are distilling them to high proof, I don’t have to add any preservatives.
The botanical spirits are blended together and aloe vera juice is added.  The combination of distillates sits together for 10 days to blend flavors in 1,000 gallons tanks.  *1,000 gallons is the batch size.
The blend is filtered through plate and frame filtration, a technique often seen in the wine industry, which removes the naturally occurring sediment without removing flavor.

Cane sugar is added in the end (because it’s a liqueur).

Production Volume
What’s Next
Chareau is currently working on a Brandy, which will be launching in Los Angeles.  To accomplish this, they are looking for a new space for the Brandy to be aged.