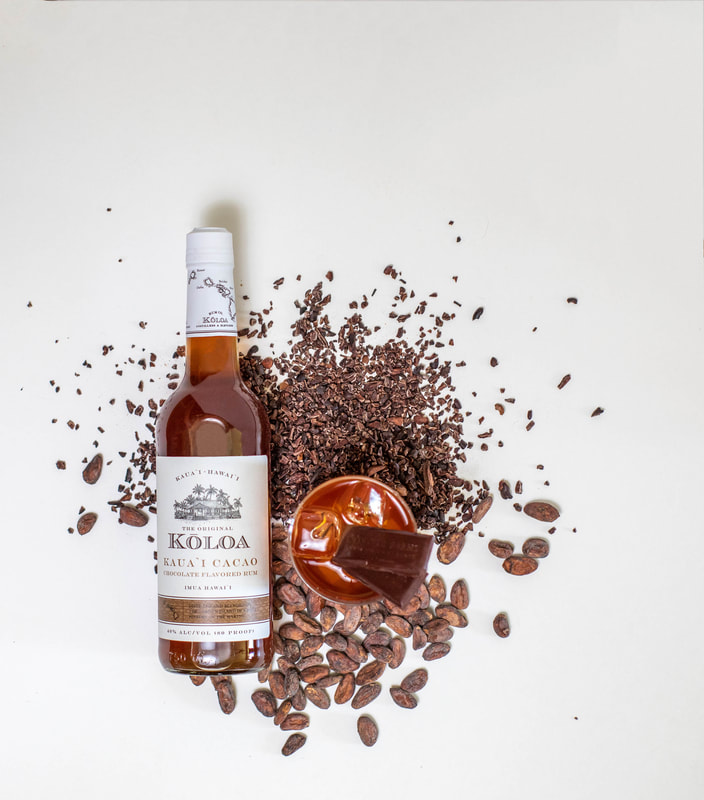 By Brent Nakano
Kalāheo, Kaua`i, Hawai`i – Hawai'i’s award-winning Kōloa Rum Company debuts Kōloa Kaua'i Cacao Rum in partnership with Kaua'i’s Lydgate Farms. The chocolate-flavored rum incorporates the finest Hawaiian-grown cacao from Lydgate Farms, an award-winning, fifth generation Kaua'i family farm that is recognized for producing some of the finest chocolates in the world. The collaboration between two of Kaua'i’s leading producers results in two new products that reflect the remarkable flavor and history of the Garden Isle.

“The debut of Kōloa Kaua'i Cacao Rum is our first flavored rum release in five years, and we are so pleased to have created this rum in collaboration with the Lydgate Farms 'ohana,” said Kōloa Rum President and CEO Bob Gunter. “At Kōloa Rum Company, everything we do is deeply rooted in our commitment to the land we call home, so we are incredibly proud to partner with our neighbors at this fifth generation family farm.” “I could not imagine a more perfect pair than Lydgate Farms and Kōloa Rum,” said Lydgate Farms CEO Will Lydgate. “Not only do we share the same values in regard to being stewards of the land and culture here on Kaua'i, but we also share a passion for quality, flavor, and local agriculture that is evident in both of these new products. Chocolate and rum - a match made in paradise, grown on Kaua'i.”

​After being fermented, the cacao is sun-dried, then roasted to a medium-light profile as to mellow out the bright cacao fruit vinegars and emphasize the notes of fudge and nuts. This results in a hybrid cacao roast profile which is less fruity than the typical New American style and more European with the classic chocolate notes (fudge and nuts).
Kaua'i Gold Rum
Hawaii grown sugar is mixed with water then fermented using a high-temperature tolerant yeast strain that was developed originally in Guadalupe. Once the fermentation is complete, in approximately five to seven days, the mash is distilled in a 550 gallon stripper still with a seven plate copper column, then redistilled in a Liberty Copper Smith's pot still which was built in 1947. After distillation, the Gold Rum is created by the addition of caramelized sugar to the white rum for color.
Hawaii Beverage Guide Tasting Notes:
Aroma: An initial fudge aroma is accented by notes of banana, almond and baking spice.
Palate: Banana, Almond, Baking Spice,
and of Course Chocolate. Think chocolate banana bread. The rum is already sweetened, therefore it does not need additional sugar when making a cocktail.
Suggested Cocktail Techniques:
• Neat
• Shaken
• Stirred
• A hot drink, but only if used with light roast coffee as to not hide flavors or in a hot chocolate made specifically with Lydgate Farms
chocolate chips.