Maui Brewing has been doing a line of soda with Island Cola, Island Ginger Beer, and Island Root Beer.  They also make beer, which is the first part of distilling whiskey.  With their new venture, Kupu Spirits, they have combined the pre-existing products with a still to create the new product line.  We talked to Maui Brewing Company Founder and CEO, Garrett Morrero, to learn more about the new venture.
<
>
Company Name
In the Hawaiian language, the word “kupu” means “to sprout” or “to grow.” “Kupu” is often represented by the new growth of an established fern where the shoot grows from the center of the trunk; its strength and protection are derived from the original base.  According to Morrero, “The name Kupu Spirits was chosen to symbolize the brand as part of the natural growth of Maui Brewing Company
Why Spirits
As the company name alludes, Kupu Spirits was developed as an extension to Maui Brewing Company’s Beer operations.  Morrero explained, “As we grew and matured as a company, we recognized that there are always different occasions to drink. Sometimes you want cocktails; sometimes you want beer.  We’re working on a hard water as well because there’s also an occasion for that.  We’re basically trying to take what we did with beer and make an authentic, local Hawaiian craft product with the same principles of sustainability, authenticity, integrity, innovation, flavor and complexity, and apply that to other areas.  Whether it’s being flown in or shipped in, there’s no reason we shouldn’t be making it if we have the capability.  I think when we have visitors from all over the world, they want to experience Hawaii and what’s local about it.” 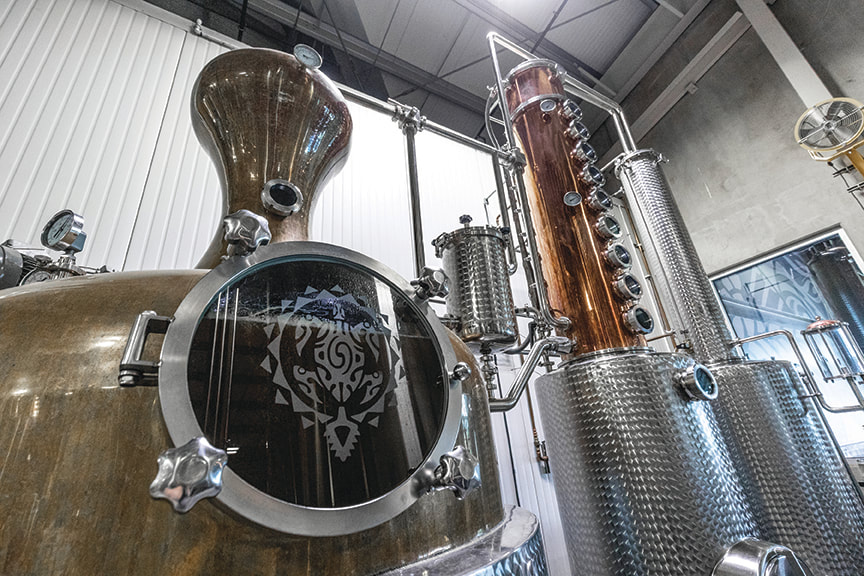 Kupu Spirits’s hybrid pot still provides flexibility in the types of spirits they can produce.  The still can be run as either a pot still, a column still or in combination.  Morrero explained, “Having the side column gives us that ability to engage or not engage any combination of the plates. We can distill to a higher or lower proof based on that, and we can make multiple runs of the same spirit to be able to further distill and rectify that spirit.
Kupu Spirit’s acquisition of the still was supported by a one-to-one matching funds grant from the Maui County Office of Economic Development.  The purpose of the grant was to promote new manufacturing product lines.  Kupu, however, put up much more money than required to show their commitment.  According to Morrero, “We really wanted a Vendome (still), but the lead time was so long that we could not have started the project and met any sort of timeline.  We then partnered with Allied, and they do manufacture in China. I always say: ‘There's good China and there's bad China,’ and these guys are good.”

One of the major benefits of the grant was that it helped mitigate risk for a project that wasn’t quite legal yet.  Morrero explained, “Having that grant took some pressure off of us during the period where we had to get things legal and change laws, and to be able to get the licensed category that we created recognized. That whole process took a solid three to four years. I would be remiss to not throw a bone to the county for their support.” 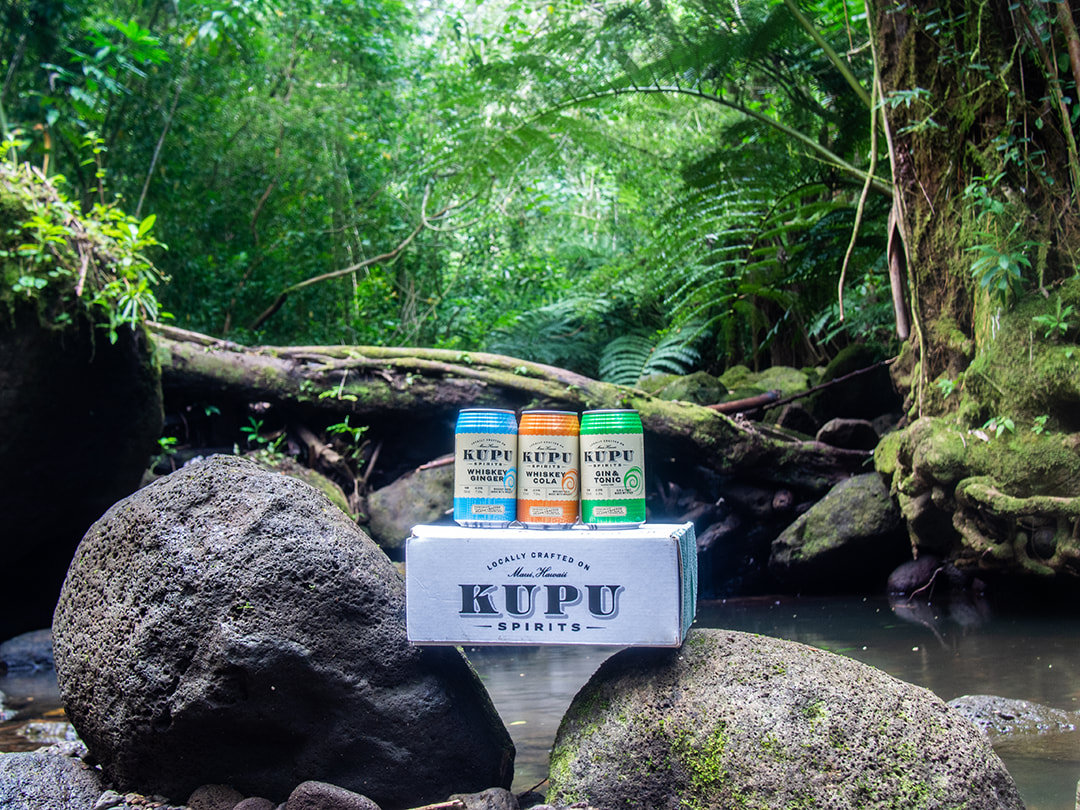 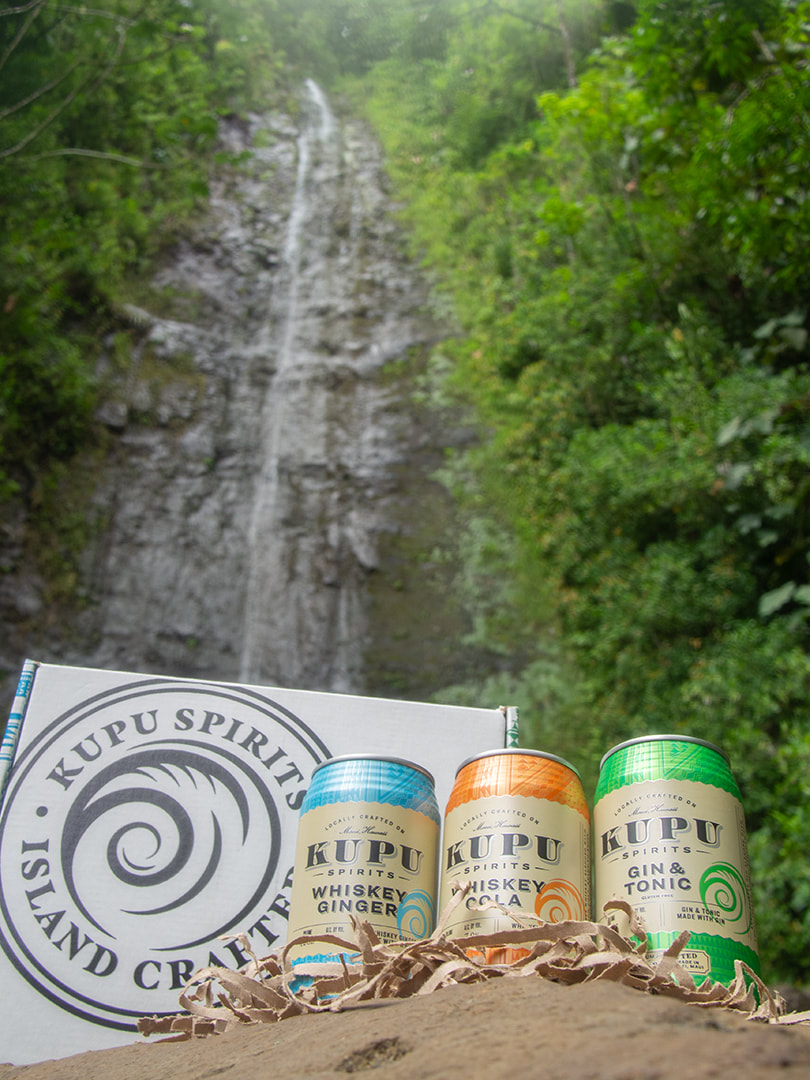 Mash Bills
Bourbon Style Base of 75% Corn and 25% Rye are used in the Whiskey Cola Cocktail.  This is used to provide a smooth finish.  About 10% of the malt base includes local Maui corn.

Rye Style Base of 95% Rye and 5% Barley are used for the Whiskey Ginger Cocktail to complement the ginger’s spiciness.
Fermentation
Fermenting beer and fermenting distiller’s beer to make whiskey are similar.  According to Morrero, “Fermentation is much faster in distillation.  It usually takes between three to five days, depending on how big the batch is and what specific style we're making.  We're still trying to dial in, long term, what that exact process will be and how the nuances of flavor come through based on presentation time, temperature, yeast strain, et cetera. We've been trialing distiller’s yeast, but we've also been using different beer yeast to see how the beer yeast impacts the flavor profile of the then finished whiskey.  We're also starting to look at using other malts that are typically more traditional for brewing, (like Crystal Malt or Munich Malts, or CaraPils) and how those then impact the flavor profile of the wort or wash and the finished whiskey.”  When asked about the differences in approach to distiller’s yeast versus brewing yeast, Morrero said, “[Typically] on the distiller side, you pitch the yeast and just let it free rise and chew up all the sugar, and then distill. Whereas on the beer side, we're controlling fermentation temperature and we are very clean with our processes.  Distilleries typically are nowhere near as clean as breweries in terms of sanitation, sterilization and the care that goes into preparing a tank because nothing survives distillation.  You don't have to be worried so much about wild yeast or other things getting in there; whereas on the brewing side, the easiest way to kill a brewery would be to be dirty.”
Aging
To be called whiskey, according to the Alcohol and Tobacco Tax and Trade Bureau, the spirit must touch oak; however, there is no requirement for how long the spirit and oak must be in contact.  Kupu Spirits’s white whiskey is aged for at least eight hundred eight minutes (808) in new toasted oak barrels to “poke a little bit of fun at the government.”
<
>
Kupu Spirits set out to make a gin that “was unlike anything else out in the market,” and that the team wanted to drink and that “put a bit more of Hawaii into gin [via] using local botanicals as much as possible.'' The development process was trial and error with Morrero saying, “I know, it was more than 45 batches, but less than 60 batches [that we had] to create to get to the point that we're at now.'' The team eventually settled on a botanical blend, including: juniper, local kaffir lime, local oranges, lemon peel, grains of paradise, and hibiscus.  According to Morrero, “Hibiscus is something that's not normally found in gin, but we wanted to use a good portion of that to be able to influence the flavor profile. Beyond that, juniper has to be in gin. We have (local) kaffir lime because we wanted this heavy citrus component along with the oranges, which, so far, have all come from my house.“
Base Distillate
Neutral Grain Spirit from UltraPure
​
Botanicals
Juniper, hibiscus, local kaffir lime, local oranges, lemon peel, grains of paradise

Of the ingredients, juniper is being sourced from abroad; however, the source of the hibiscus varies due to the limited quantities available locally.  When not available, it’s sourced from San Francisco Herb Company, as it’s a common spice.  Maui Brewing Company has always been an advocate and supporter for local agriculture, and always tries to source locally when possible.  Morrero provided the following insight on the difficulties of sourcing local agricultural goods: “Whether it be hibiscus, coconut, pineapple, et cetera, there are just not enough farmers here that are actually harvesting.  Even if there's wild hibiscus everywhere that you could be using, there's just no one farming it and drying it.  At some point, you have to decide what business you're in.  I think that's actually a good discussion point because it [reveals] the sad state of affairs for agriculture in Hawaii. It’s that, ‘Hey, we want to use it’ (and buy it) but there's no one actually [producing] it because they don't want to be farmers anymore.  I think that's a dangerous place for us [to be in] if we're trying to find some level of food independence in our state.
Production Process
To make the gin, each botanical is individually macerated into a neutral grain spirit from Ultrapure in the Midwest, then distilled.  The botanical distillates are then blended together to create the final product.
​
<
>
Soda
Maui Brewing’s Soda line started in 2008 with the root beer.  Since then, cola, ginger beer, and tonic were added.  Regarding the soda development process, Morrero said, “Each of these new sodas have gone through countless trials of adjusting an ingredient here or an ingredient there. For the specific type of sugar we’ve purchased and used for each soda, we’ve had to change our recipe due to not having the local version of the sugar because it created a slightly different flavor profile. All of these ingredients affect the flavor profile of our sodas, so when you list them, you gotta make sure they’re right.”
Ingredients
Maui Brewing’s soda line incorporates local ingredients when possible.  According to Morrero, “To make the cola, we have a company on the mainland that makes an organic extract out of all those ingredients, which allows us to make our sodas with consistency.”  Along with the extracts, local honey and local vanilla bean are also used.  The Ginger Beer, which may be more of ginger ale as it’s not fermented, utilizes sugar and Hawaii-grown ginger.  To produce it, ginger is pureed to provide the desired spicy quality then combined with sugar and water.  Maui Brewing’s Tonic, beyond being flavored with quinine and having a reduced sugar content, utilizes Hawaii-grown lemongrass.
Production Process
The manufacturing of soda from sugar and flavor to the time it’s canned takes approximately two days.  According to Morrero, “I think the longest piece on the soda side is the brewing process itself.  That involves [in the case of the cola]: measuring out the sugar, measuring out the honey, measuring out vanilla.  We even have to cook ginger for the ginger beer to get the spice character that we're looking for.  This brewing process is maybe four hours or so.  The cooling period probably takes the longest as we must let it [the brew] cool down to a point where we can actually carbonate it; that's overnight with the assistance of the glycol we use in that [the brew].  In reality though, this is the way we do it today. We were actually meeting to see how can we evolve the process now that the volume is so much higher than when we were just doing soda. [We are] looking at what type of equipment, efficiencies, and change (in the process) that will give us a more streamlined process.”

To make Kupu’s canned cocktails, the soda is mixed with the spirit.  The challenge, Morrero mentioned, was scheduling and making sure that enough spirit is ready.  The spirit is then blended back with the soda to get the right alcohol level and then packaged.
Product Availability
Kupu Spirits’s product is starting to hit Hawaii retail shelves, and Morrero mentioned that they have zero plans to export to the mainland.

​
HBG Commentary
​
Kupu Spirits’s cocktails are great tasting, refreshing and built for Hawaii’s heat and humidity.  From a flavor perspective, these are simple two-ingredient cocktails with clean and poignant flavors.  They are not complex, nuanced, and hugely aromatic, but that’s the point.  They’re meant to be drank out of the can, and not specific glassware.  They are built for situations where ease, accessibility and portability are as important as flavor.  They’re great for taking to the beach and hiking; they come in aluminum cans, which can take a beating in a backpack.  Volume service situations where there is little time to make even a two-ingredient cocktail with the proper quantity of spirit will also find this product great.