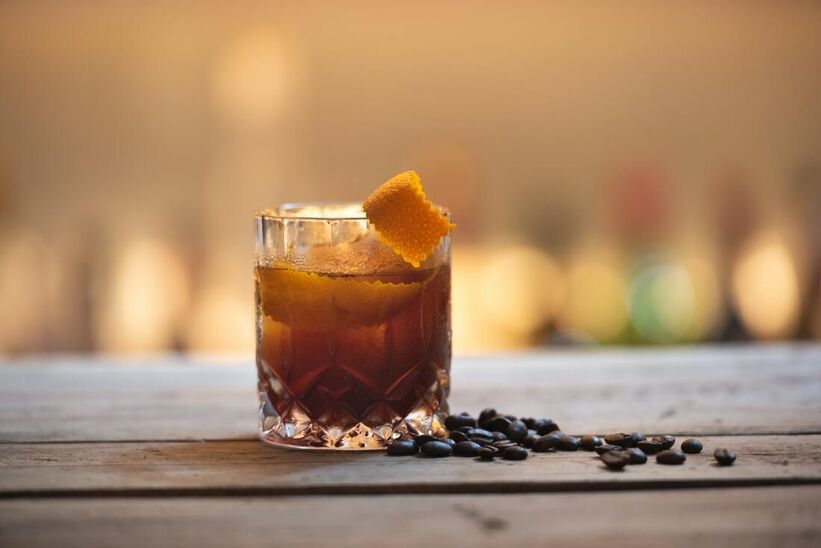 Photo by: Li Sun Via Pexels.com

Rum is a more complex category than many of the rules would lead one to believe. Sugarcane distillates come in various iterations. In the United States, they are often all lumped into one category: Rum. However, the category is much more complex, since there are multiple geographical indications defining ingredients and production methodologies in order to preserve a traditional method. The Alcohol and Tobacco Tax and Trade Bureau (TTB’s) definition of rum is lax, which allows for companies to label sugarcane distillate with artificial flavors and lots of added sugar as “rum.” Ultimately, many of the legacy rum producers in the Caribbean have been calling for increased transparency throughout the manufacturing process. 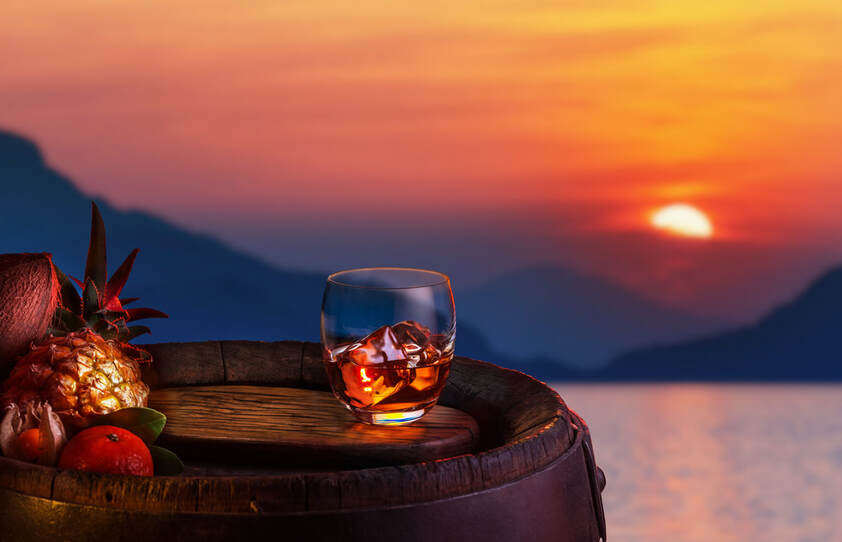 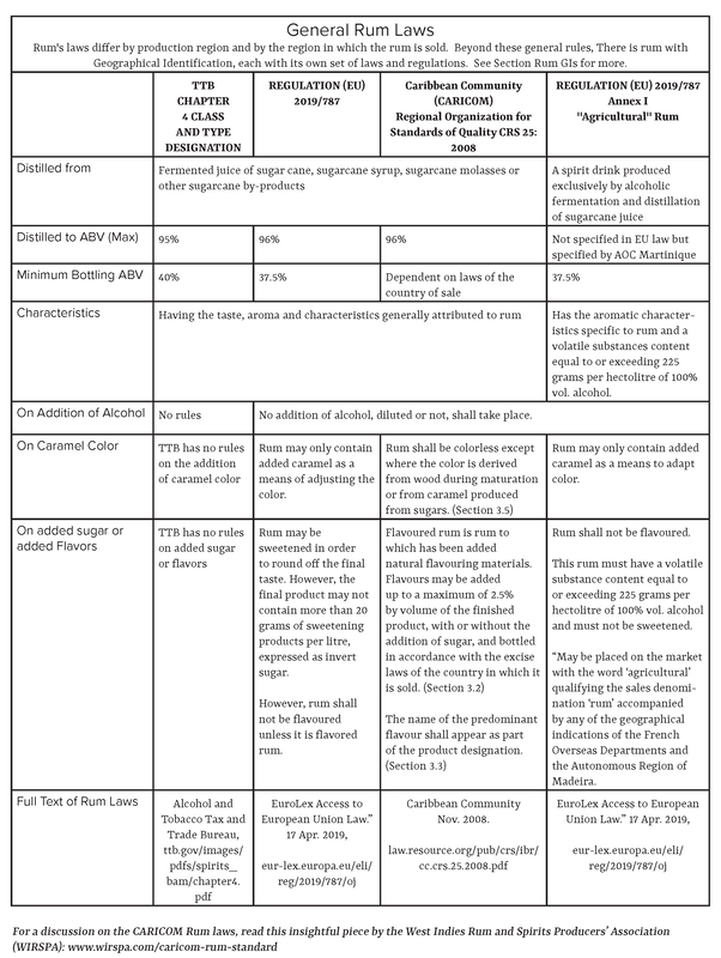 Production
Once the sugarcane is cut, it should be pressed within 24 hours for optimal flavor. Once pressed, the juice is strained to remove any solids.

Ideal Sugarcane Juice
• Brix: 14° - 16° Bx.
• pH of 5.0 to 6.0. For optimal yeast propagation, the pH needs to be lowered to 4.5 before fermentation.
Notes about fresh pressed sugarcane juice

• If fresh pressed sugarcane is used, then the varietal of sugarcane can be expressed in the final product. There are distillers that produce single varietal expressions.

• If fresh pressed sugarcane is used, wild/spontaneous fermentations are not typically used, due to the inconsistent nature of the resulting fermentation.

Sugarcane Syrup or Turbinado Sugar or “Raw Sugar”
• Sugarcane juice is pressed, then heated to reduce the water content. This dehydration process extends the shelf life of the sugar cane, yet preserves the high sucrose content of sugarcane.

• Raw sugar is similar to sugarcane syrup, but differs in that it has all the water eliminated from the sugarcane
juice.

Rum is distilled in a variety of unique still configurations. From a historical perspective, still configurations exist from a period of research and development in the late 1800s, which developed after the rules and regulations of European whiskey were set by already-established flavor profiles utilizing those stills, whereas American whiskey largely uses post-prohibition techniques. Given that many of the still designs were high enough capacity to remain profitable, legacy stills continue to be in operation. Steven Cage, the President and Owner of still maker company Cage and Sons Distilling Systems, provided some of the following insights:
<
>
Batch distillation is typically used to produce
heavier and more flavorful styles of
rum than in a continuous distillation. In
the batch distillation process, time is used
to divide common batch distillation set-ups
in the rum industry, including:
• Pot stills and double distillation, where the first pass is known as the stripping run, and the second pass is known as
the spirits run.

• Double Retort Pot Stills (in American whiskey, this is known as a thumper) are also more common to the rum industry
on a larger scale than in many other spirits. This setup essentially connects multiple pot stills together.

• In more modern distilleries, there is a batch setup which includes a pot still and one or more column stills. In this setup, the different segments of the column still, which are separated by plates, act as mini-pot stills, in that there is some vapor that passes through to the very top, but each is designed to add reflux back into the main heating vessel. Ultimately this is then
collected in a similar way as other stills. A note on still types: The term ‘hybrid still’ is a source of confusion. Though there are columns, because the still design uses time to separate out the heads, hearts and tales, it is not continuous.
Continuous Distillation/ Column Stills
In continuous distillation, different parts of the still have different temperatures, which separates the segments of distillation. They are called continuous stills because they can be run continuously, 24/7, for as long as there is feedstock to be distilled. The resulting distillate is typically of higher proof than in batch distillation.

Coffey Stills were the original design for continuous distillation. Invented by Aeneas Coffey and then refined by his son
Aeneas Coffey, Jr. in the 1840s, the still has two parts: The first is called the beer column (or analyzer) where the “low wines”
are roughly separated from the mash/wash. The second part, which can be a separate column or higher up on an extended column, is called the rectifier column. This is where low wines are further refined and separated into the heads, hearts and tails, and each will sit in a different segment of the column.
Industrial Column Stills
In high volume, low priced rums, a series of column stills can be used to create a more refined spirit. Naturally, larger columns
are capable of distilling larger volumes of liquid. However, instead of building a single large vertical column, it can be separated
into smaller segments, including but not limited to:
• Aldehyde column is where heads can be collected and sold for industrial usage like fuel ethanol or can be run through
another column to further refine them and reclaim usable alcohol.

• Degassing column can refer to a post rectification process of the hearts portion which removes the higher volatile
portion of the heads.

• Simmering column is used to further refine the "hearts" portion. It is typically used to make high proof, exceptionally
neutral alcohol like flavorless vodka or medical grade ethanol.
Distillation Proof
Distillation proof varies based upon the type of rum produced. Typically, light rum is made in a column still and heavy rum
(high ester rum) is made in a pot still. However, this is not always true.
• Rhum Agricole can be distilled as low as 50% ABV.

• Light rum is distilled at a higher proof. It must be distilled under 95% ABV or else it becomes vodka. 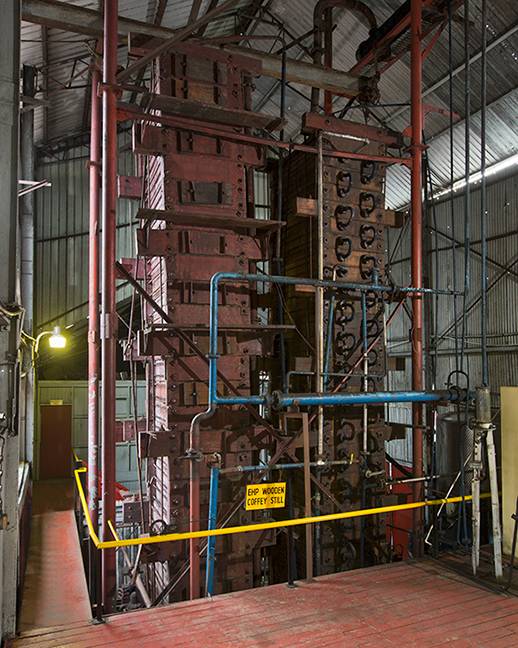 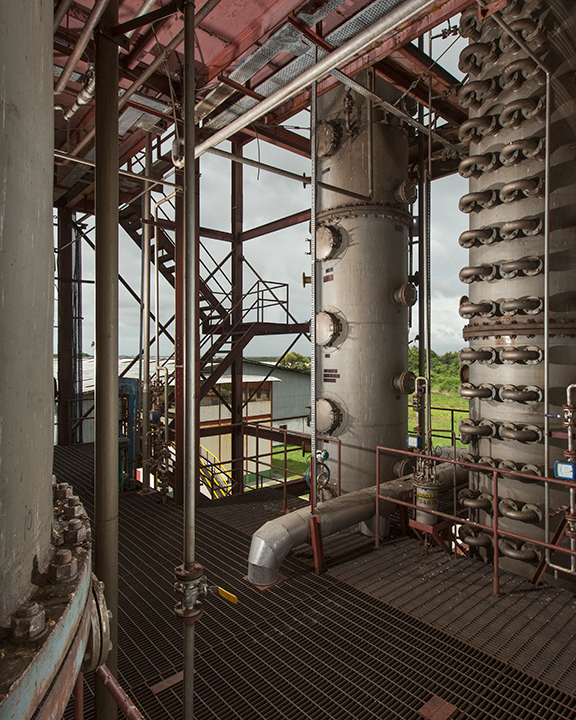 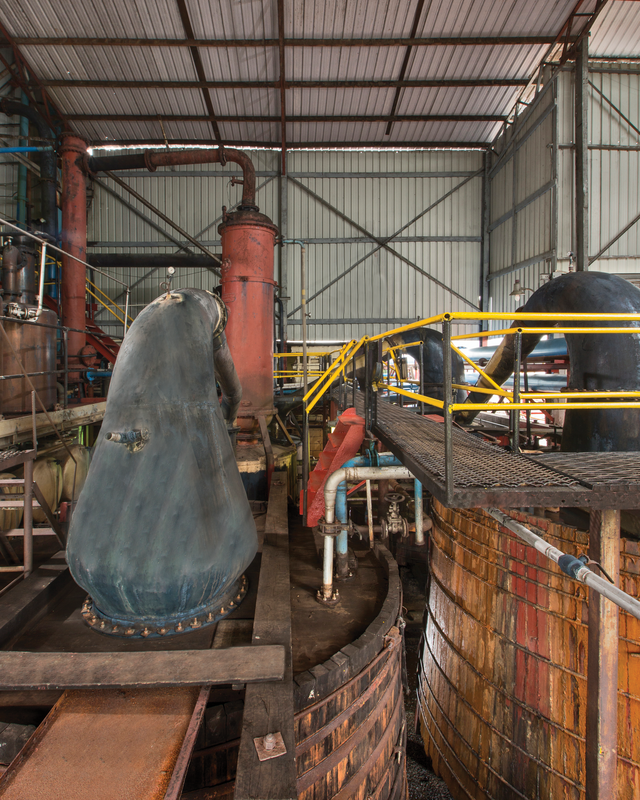 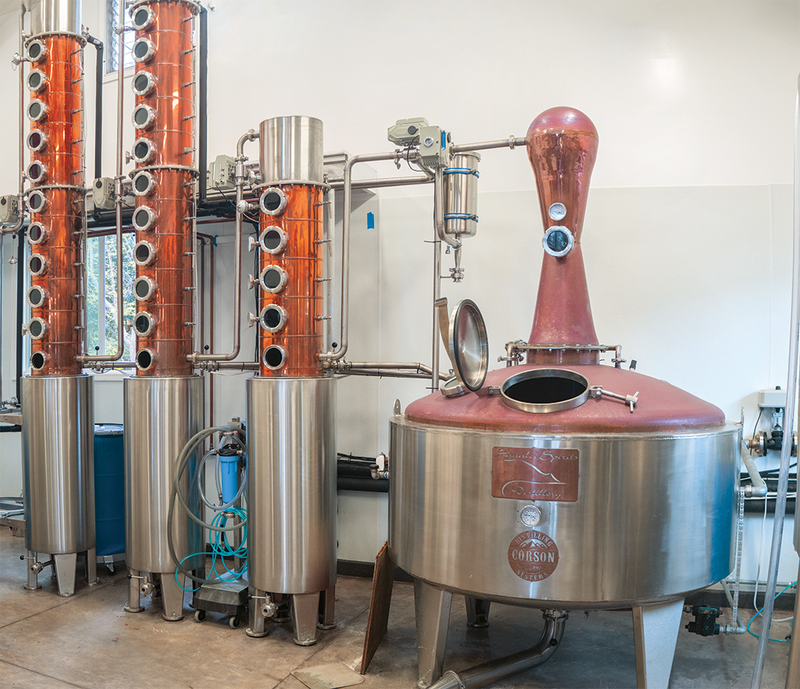 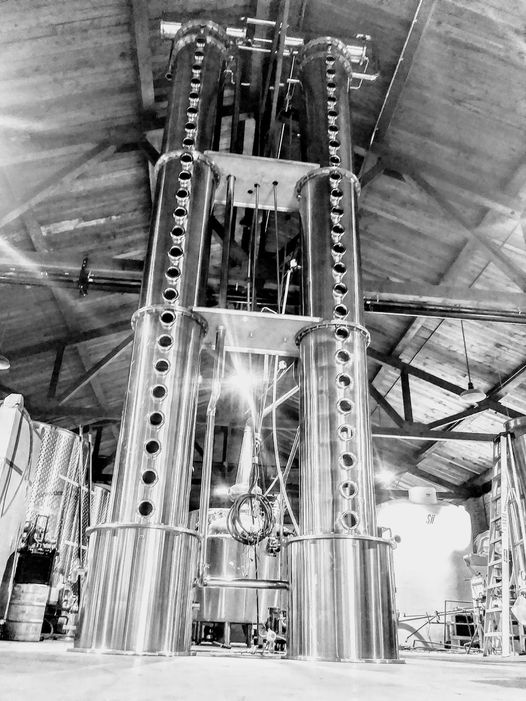 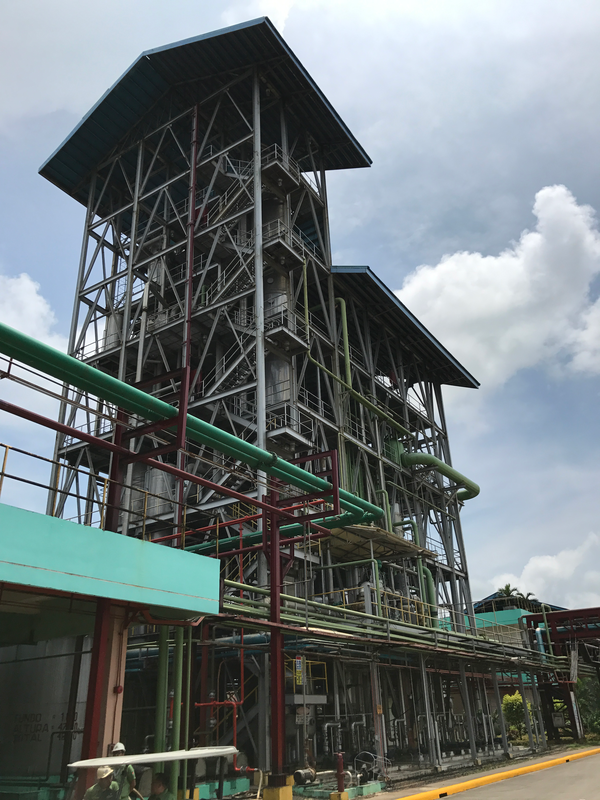 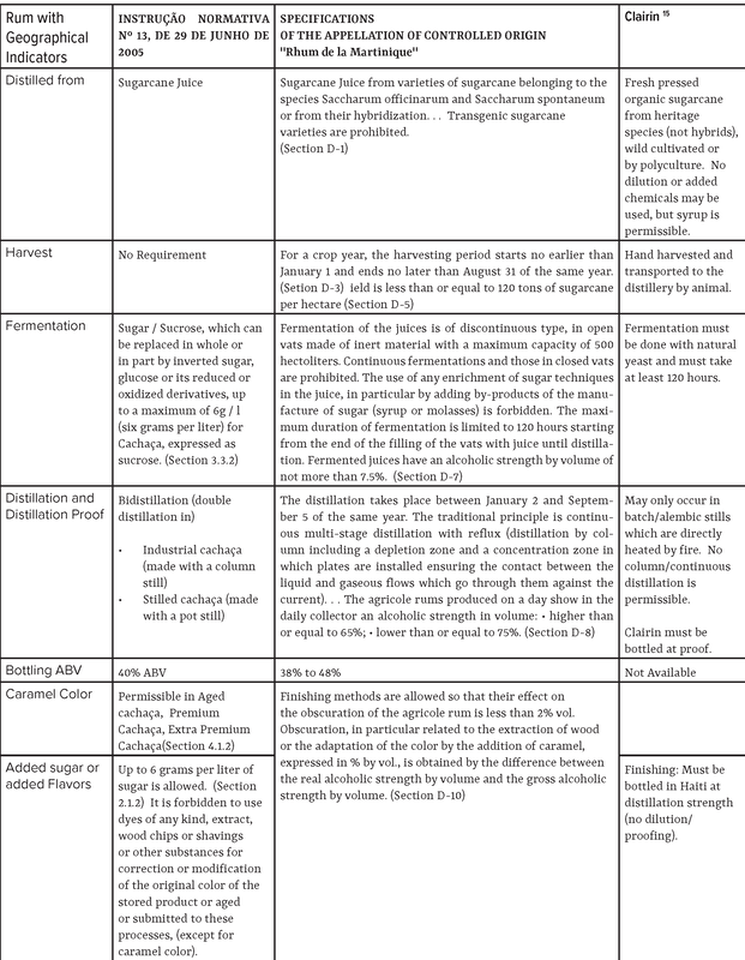