A Guide to Beer

Beer has been brewed for the past 13,000 years. Archaeological evidence form a Natufian burial site at Raqefet Cave, Israel dating back from 13,700–11,700 cal BP shows a brew of wheat or barley, oats, legumes and bast fibers (including flax) that were packed in fiber-made containers and stored in boulder mortars.1 Overtime, beer has been refined as brewers’ knowledge of the biological factors that influence the flavor of beer has increased. This understanding has also led to the development of different styles of beer which vary by the ingredients and production techniques. For example, in the 16th century, hops replaced an herbal mixture called gruit. This change is noted in the historical record as the Reinheitsgebot, also known as the German Purity Law of 1516. This law defines beer’s ingredients as: Malted Barley, Yeast, Hops and Water. Another large leap in beer development was the confirmation of microbial fermentation in 1876 by Louis Pasteur. Most recently the DNA analysis and chemical analysis of yeast and hops have led to major developments in understanding flavor.

In a beer, malted barley (malts) make up the predominant flavor characteristic. It also provides the sugars that are converted by the yeast into alcohol.
<
>
Malting
The malting process is when barley, the seed of the barley plant, is germinated to activate the enzymes in the barley kernel which:
The Barley Malting Process
1. Steeping: Barley is steeped in water. This essentially waters the barley for growth.

2. Germination is the stage at which the barley seed starts growing. During this phase, enzymes become activated.

3. Drying, Color and Flavor Formation:
Barley is dried to stop the germinating seed from becoming a plant. This is done though either kiln drying or roasting. A byproduct of this is adding various flavor profiles depending on the duration of this process.
Types of Malts
In a beer there are two general general categories of malts: Base Malts and Specialty Malts. In combination, these malts make up the Grain Bill/ Malt Bill/ Grist Bill.
​Base Malts
Base malts are the predominant contributor of enzymes that convert the starch into fermentable sugars. The two main decisions for a brewer involve using a 2-row versus 6-row malt, and picking the roast profile of the malt. 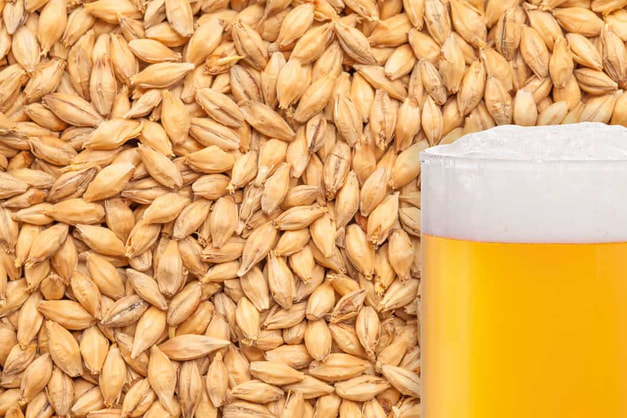 Pale Ale
Color: ~2°L to 4°L
Pale Ale Malt is most common base malt. Another name this style may be the barley variety ie Maris Otter or 2-Row 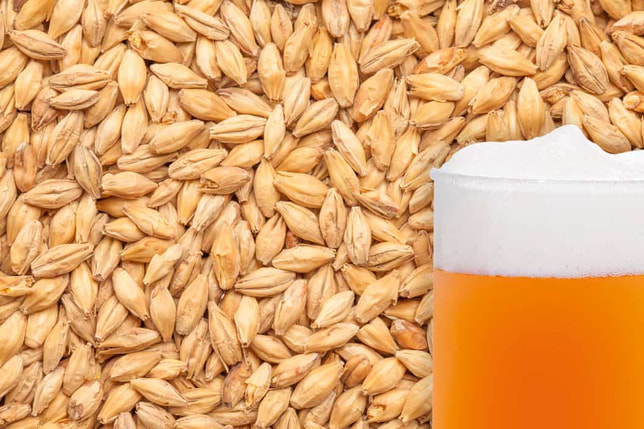 Vienna
Color: ~3°L to 7°L
Vienna malts have enough enzymatic ability to be a base malt, or can be used as a “specialty malt” 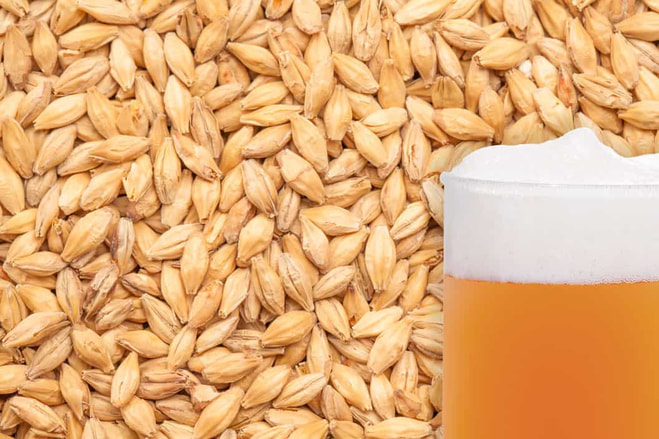 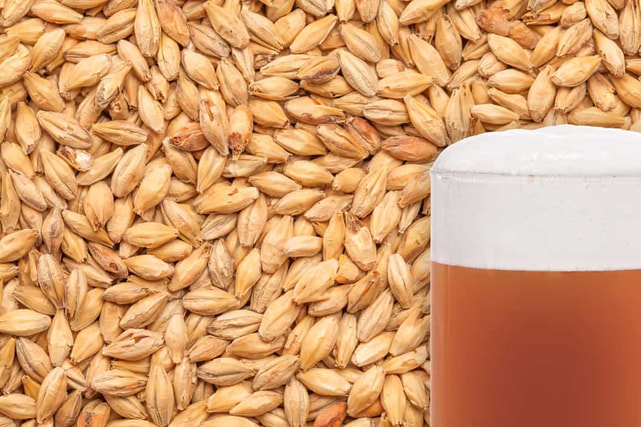 Specialty malts are used to modify the malt’s base malt and contribute color, flavor, and other characteristics to the beer. Specialty malts are used in relatively small quantities compared to base malts.
<
>
Caramelized Malts are used to impart a deeper color and a fuller malt flavor and aroma than using base malt alone. They come in a range of colors and are produced by kiln drying malted barley between 180° to 350° F, a higher temperature than base malts. Due to their high drying temperature, they contain fewer enzymes than base malts. There are general and proprietary styles of caramelized malts. These are:

Roasted Malts are produced by kilning at very high temperatures followed by roasting. Styles of roasted malts include:
Unmalted Barley is barley that has not been malted and therefore has no enzymes. There are two main types of unmalted barley used in beer.
Rauchmalt is a malt dried using beechwood smoke and is typically used to make German Bamberger Rauchbier. This is different from the malt used in Scotch Whisky which uses peat smoke.

Adjuncts are unmalted and starchy cereals that do not have enzymes. This means that they need to be mashed with base malts to extract their sugars. Examples of adjunct grains include faked oats, flaked barley, wheat, and rye.

Hops provide aromatic flavors to beer. They are the flowers of the hop bine (not vine) Humulus lupulus. Historically, hops were added directly to the cask after fermentation to keep the beer fresh during transport. As the understanding of microbial fermentation and food science has improved, hops have become predominantly used for flavor. Recently, the science of “hop analytics,” which is the research and analysis by laboratories of flavor compounds in hops, has
created a major source of innovation in the field.
<
>
Hops are generally divided into two categories:

• Bittering Hops provide bitterness to beer. These typically have a high Alpha Acid content of 10% by weight or higher. Some brewers will say that when choosing bittering hops, bitter
is bitter and due to other flavor compounds degrading in the boil, that high alpha acid content is their primary concern.

​• Aroma Hops provide aroma to beer. They typically have an Alpha Acid content of 4% to 8%. Given the large variations of flavor that aroma hops are able to provide, much of the current
hop research and development is focused on creating new aroma hops. The Hop Breeding Company (hopbreeding.com), a partnership between two Global hop giants, Yakima Chief Hops and Barth-Haas, for example was established in 2003. From a classic beer style perspective, a common subcategory of aroma hops used in European styles of beer including pilsner and continental lagers are Noble hops. These classic European varieties have low alpha acids and subtle aromatic qualities. The noble varieties share their names with their town of origin: Hallertauer, Tettnang, Spalt, and Saaz

Beyond the perceived flavor characteristics, hops have measurable characteristics that brewers look for. These are:
​
​Flavor compounds
Strig, Bracteoles, Bract (Vegetative part of the plant): These parts contain essential oils of hops.
Lupulin Glands: Stores the pollen of the hop flowers. This pollen is known as lupulin. The lupulin glands ultimately contribute both hard and soft resins, all of the hop oils, and some polyphenols. 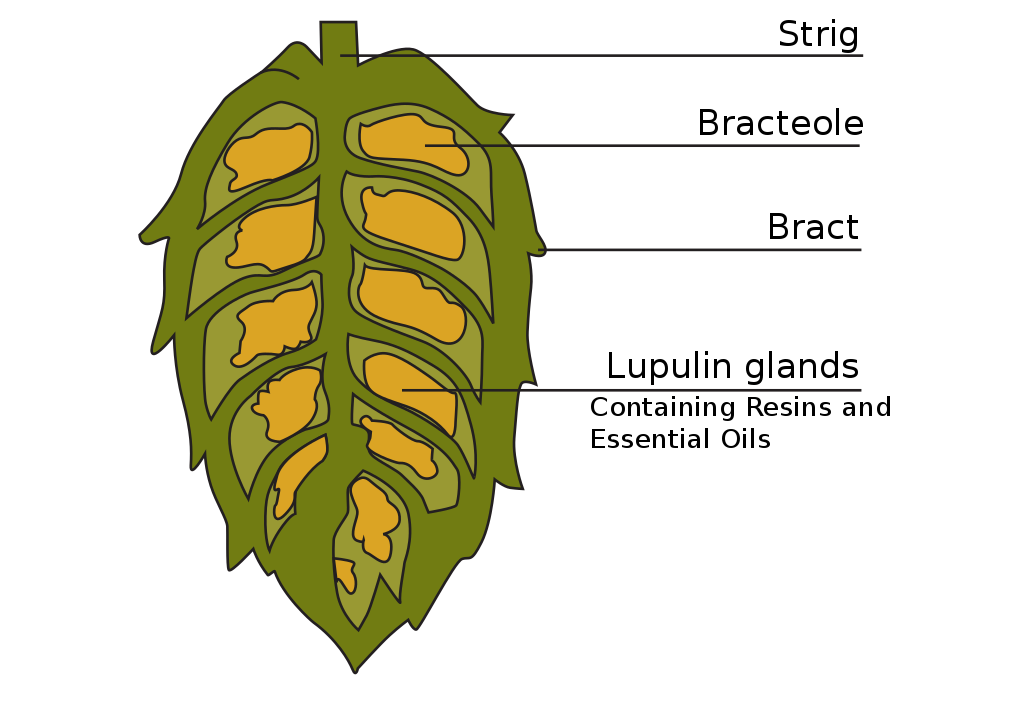 After hops are picked, their essential oils may start to degrade within 24 hours of harvest. To preserve these essential oils, hops are typically processed through kiln drying. However, this is not always the case. The most common forms of hops are:
Hop Schedule
The hop schedule, or when to add hops, is just as important as what hops and what quantity to add. This occurs because alpha acids isomerize and add bitterness with heat, however, essential oils and aromas can denature with heat. It should be noted that one type of hop can be both a bittering hop and an aroma hop if integrated into the wort at different times. The following are some general hop schedule guidelines:

Hops have an affinity for growing between 35-55 degrees north or south of the Equator in temperate, wet climates. Let’s take for example the wine-grape growing industry; some grapes grow only in certain regions like South Africa’s Pinotage while others, like Cabernet
Sauvignon, grow in multiple regions. However, Cabernet Sauvignon expresses different terroir (like Bordeaux Cabernet Sauvignon vs Napa Cabernet Sauvignon) due to temperature and soil characteristics.

Similarly, the differences in growing conditions for hops also create differences in hop terroir.
In particular these growing conditions involve climate (including temperature and precipitation), soil, and daylight hours (solar irradiation). Research by J. Kucera and Krofta found that increased rainfall during May to July helped increase the alpha acids in hops; heat had
a negative effect on alpha acid content.

Yeast produces alcohol and flavor compounds including esters and phenols. Only recently, relative to the history of beer, did Louis Pastuer’s research into microbial fermentation provide insight on how to manipulate flavors produced by these microscopic organisms. Even more recently, advancements in genetic testing have allowed for further isolation of specific yeasts. This has resulted in the ability to fine tune the characteristic flavor notes produced by the microbes in each beer.
<
>
Yeast Types
There are two main types of the isolated yeast strains: Ale yeast, Saccharomyces cerevisiae and Lager yeast, Saccharomyces pastorianus.

Beer is primarily composed of water. Naturally, the flavor of the water used in the brewing process will influence how the beer will taste. In fact, many famous beer styles were developed based on the water from its respective region. The Cezch town of Pilsen, where Pilsner originated, is known for its very soft water that is very low in bicarbonates. Similarly, Burton-upon-Trent is famous for its IPAs. Even the hop-forward nature of San Diego’s West Coast IPA’s is partially attributed to the higher ratio of sulphate to chloride in the municipal water. Due to water’s impact on beer, brewers may adjust water chemistry with brewing salts to match the ionic composition of the water of a particular style of beer that belongs to a specific region.

According to John Palmer, the author of the essential homebrewing
book “How to Brew,” the ions that contribute the most to
water chemistry are:
For more on brewing water by John Palmer: https://beerandbrewing.com/brewing-water/

<
>
Proper storage is critical to maintaining hop flavor, as light and heat and light easily
degrade flavor. For this reason, many brands put an emphasis on refrigeration
across the entire supply chain. Here are some general guidelines on storage:
Draft beer
Bottled Beer
Beyond aesthetics, glassware impacts a beer’s aroma perception. When choosing
a glass for a beer, here are some general guidelines:

Creating hierarchies and beer categories is completely based upon personal perspective. For example, beer can be classified by:
​The following Style Guide was organized to answer the following questions:

To answer these questions, the Hawaii Beverage Guide Chart does the following:
Table Colors from: https://www.brewersfriend.com/color-calculator/

*This file may be shared if Hawaii Beverage Guide is credited