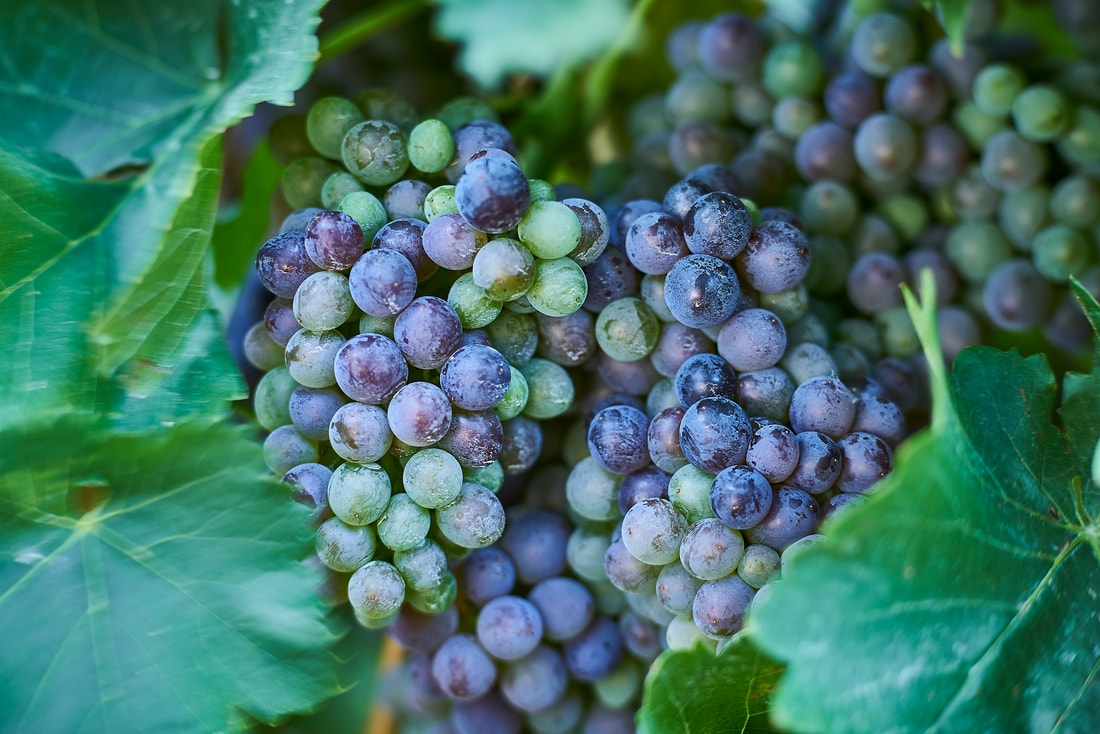 Photo by Ian Routledge Wine Australia
​Grenache is the eighth most planted grape in the world. Rather than being made into a single variety wine, it is more commonly blended with Syrah and Mourvèdre to make the famous Rhone blends of Chateaneuf-du-Pape. It is also commonly found in and Provence rosé.

Grenache is a grape of Spanish origin, though like many grapes it is not without debate. Mas and Pulliat (1875 - 5); Viala and Vermorel (1901 - 10); Galet (2000), and Lovicu (2006) points out that Cannonau is of Sardegna (Sardinia) origin. Jancis Robinson, et al. points out in her book Winegrapes (2012) that the analysis of literature makes both regions equally plausible; however, based upon the multitude of morphological mutations, including color variants, and increased genetic diversity, Spain is the more likely origin.
<
>
The earliest mention of Grenache in Spain is from 1513 in Gabriel Alonso de Herrera’s Obra de Agricultura (Treatise on Agriculture) under the name Aragones. The probable original cultivation area is in Aragon or the neighboring regin of Catalonia1. Given that Grenache is a hardy vine that is drought tolerant, it was widely planted in northeastern and central Spain and long considered a "workhorse" grape; however, it was not heralded for quality wine. Between the late 1980s and 2011 Spanish plantings dropped from 170,000ha to 63,000ha, allowing France with its 87,723ha to assume the mantle as the world's largest source of Grenache. More recently, with the success of the Gernache-based wines from Priorat in Catalonia (as well as the emerging international attention given to the New World Rhone Rangers), plantings have increased. Today Garnacha is the third-most widely planted red grape variety in Spain, behind Tempranillo and Bobal. Interestingly, Grenache was not planted in Rioja until 1901.2 This was after the phylloxera blight of the mid 1800’s.

​Other growing regions include Madrid, Tarragona, Teruel, Toledo and Zaragoza, and it is considered a main variety in the Denominación de Origen: Ampurdán-Costa Brava, Calatayud, Campo de Borja, Cariñena, Costers del Segre, La Mancha, Méntrida, Penedés, Priorato, Somontano, Tarragona, Terra Alta, Utiel-Requena, Valdeorras and Vinos de Madrid.11
​From Spain, Grenache traveled to the Southern Rhone region in the 17th and 18th century via Burgundian wine merchants who were seeking a blending variety to add body and alcohol content to their light body wines. In particular it was widely planted in the Châteauneuf-du-Pape, Gigondas and Vacqueyras regions. As of 2016, Grenache was France’s third-most planted red wine grape.3
The absence of phylloxera has allowed Australia’s Barossa region to develop some of the oldest Grenache and Syrah plantings in the world. The first plantings brought to Barissa were from Perpignan in 1832 via the collection of James Busby, who is considered the Father of Australian Wine. However more significant was Dr. Christopher Rawson Penfold’s introduction of plantings to South Australia from the South of France in 1844.4 From a stylistic perspective, Grenache was originally used to create fortified wines, a method that was predominant until the 1960’s. When tastes changed to drier table wines, plantings of Shiraz, and later Cabernet Sauvignon, became more common. However, in recent years growers have recognized the beauty of the ripe, spicy, cherry and raspberry-scented characters that single-varietal Grenache can yield.5 Winemakers have also used old vine plantings in South Australia to produce a Grenache, Syrah and Mouvèdre (GSM) blend.
Grenache is not a common varietal in the United States, though there are quality examples produced. The grape was probably first introduced to California in 1857 by Charles Lefranc, a prominent Santa Clara wine grower. Its versatility made it popular in the late 1800s. After Prohibition, acreage in California's Central Valley grew, and the grape was used to make dessert and rosé table wines. However, the grape’s acreage remained fairly small relative to other grapes. In the late 20th Century, there was a slight uptick in plantings along the California Coast as part of the Rhone Rangers movement. (www.rhonerangers.org/)

Harvest Technique:
Often Grenache is hand-harvested as mechanical harvesting is difficult for the varietal.

Protective wine making is used to preserve the fresh fruit notes of Grenache wines.
<
>
• Grenache lacks anthocyanins. To intensify their percentage in the final wine, the Saignée method is used to “bleed off” some of the juice. The juice that is bled off is used to make rosé wine. For more on rosé production visit: hawaiibevguide.com/rose-wine.

• Cold-soaking is commonly used to add more color and get better tannin and phenol extraction from the thin skins and promote red fruit flavors.

​• Gentle cap management is used, as too much skin contact will create excessive bitterness. The skin is typically removed after fermentation.

​
• Inert containers of stainless or cement are typical, but old oak may be used.
​
• Grenache traditionally contains low malic acid, so secondary (malolactic) fermentation is not required.
• Blending with heat tolerant varietals of Carignan and Mourvèdre can provide greater tannin, additional color and fresher fruit flavors to the blend.
• Maturation occurs in inert containers, including old oak foudres.
New oak can overwhelm the fruit flavors.

​• Maturation time can vary depending on style and region
requirements.

<
>
Single Varietal wines are more rare than blends
​
​Rhone Blend (Grenache, Syrah, Mourvèdre aka GSM Blend)
​Australian blend
Shiraz and Grenache
Rioja Blend
<
>
​​Similar to a Rhone Blend and most popularized by the rosé from Côtes de Provence, many French Rosés are made from this blend.
​Fortification of this style of wine occurs during fermentation. Both unaged and aged versions exist. Aging typically occurs in demijohns. 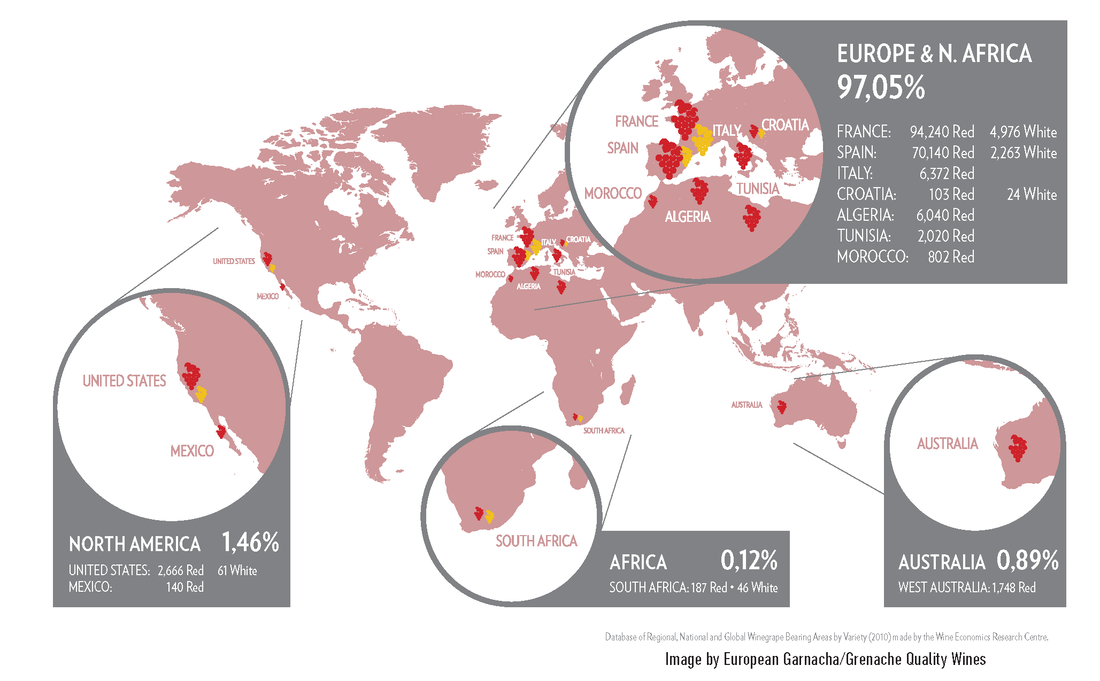 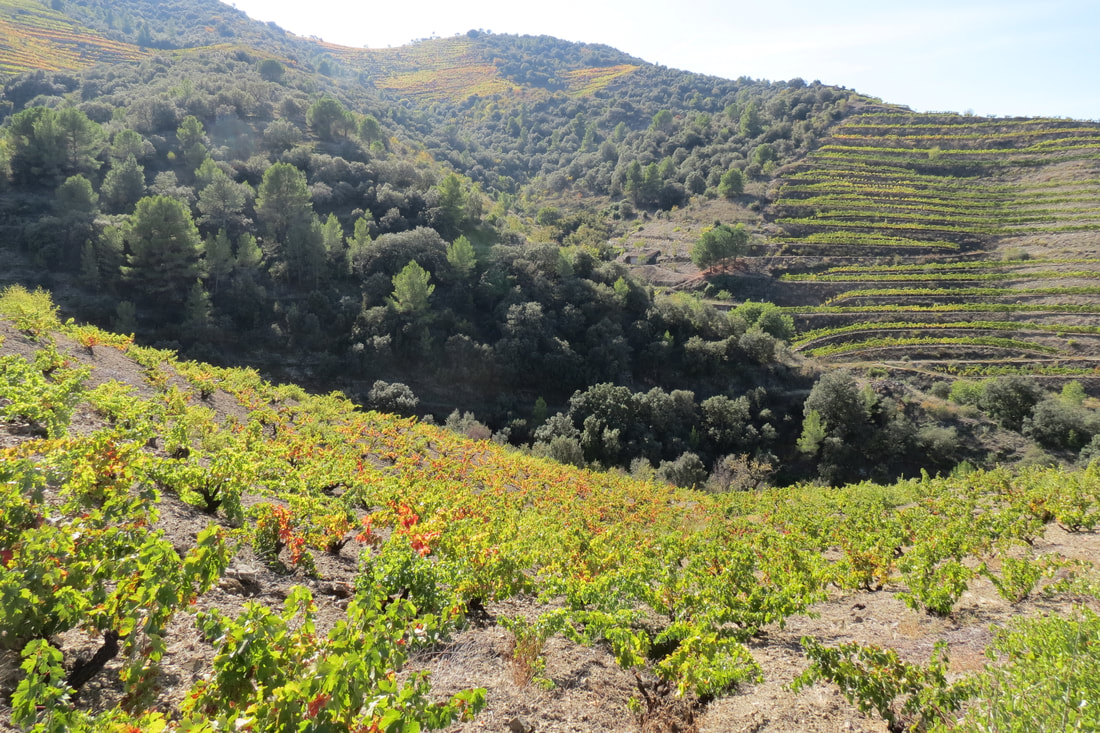 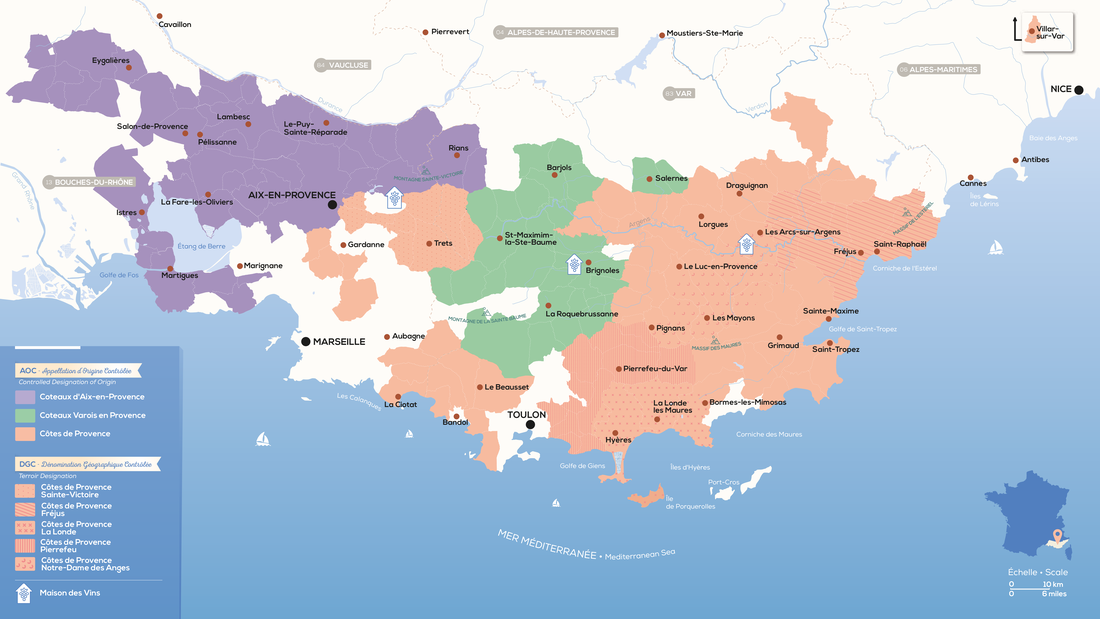 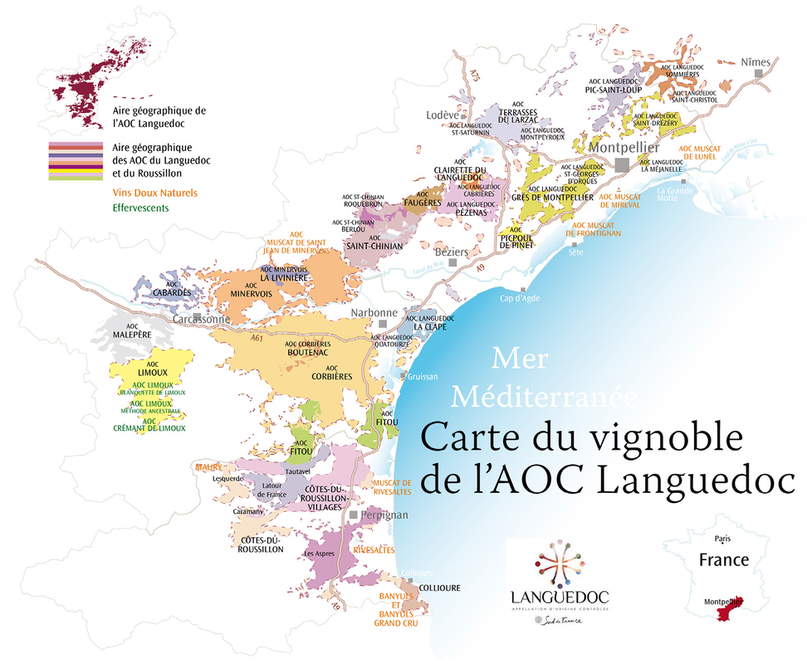