A cocktail is not a cocktail without bitters, at least, according to the May 13, 1806 edition of the Federalist nwspaper in an article titled The Balance, and Columbian Repository.  Though prominent, there are few eloquent articulations of what they are.  For example, the common description: "The spice of cocktails" leaves many confused. The world of bar-fresh commonly utilizes freshly grated spices such as cinnamon, nutmeg and cardamom in drinks.  The definition, “the seasonings for cocktails like salt and pepper”, is conceptually accurate, but still leaves much unknown.  The historical usage of bitters as a medical remedy does not provide relevant context either.  Rather, through dissection of the history, ingredients, varieties and usages, the following definition is formulated:

Bitters are a potent, concentrated potion of fruits, roots, herbs, spices, and botanicals accented by bitter notes.   A couple of dashes of aromatic bitters added to a cocktail enhance dimension, depth and provide bittersweet contrast to the accompanying liquors, fruits or other sweeteners. 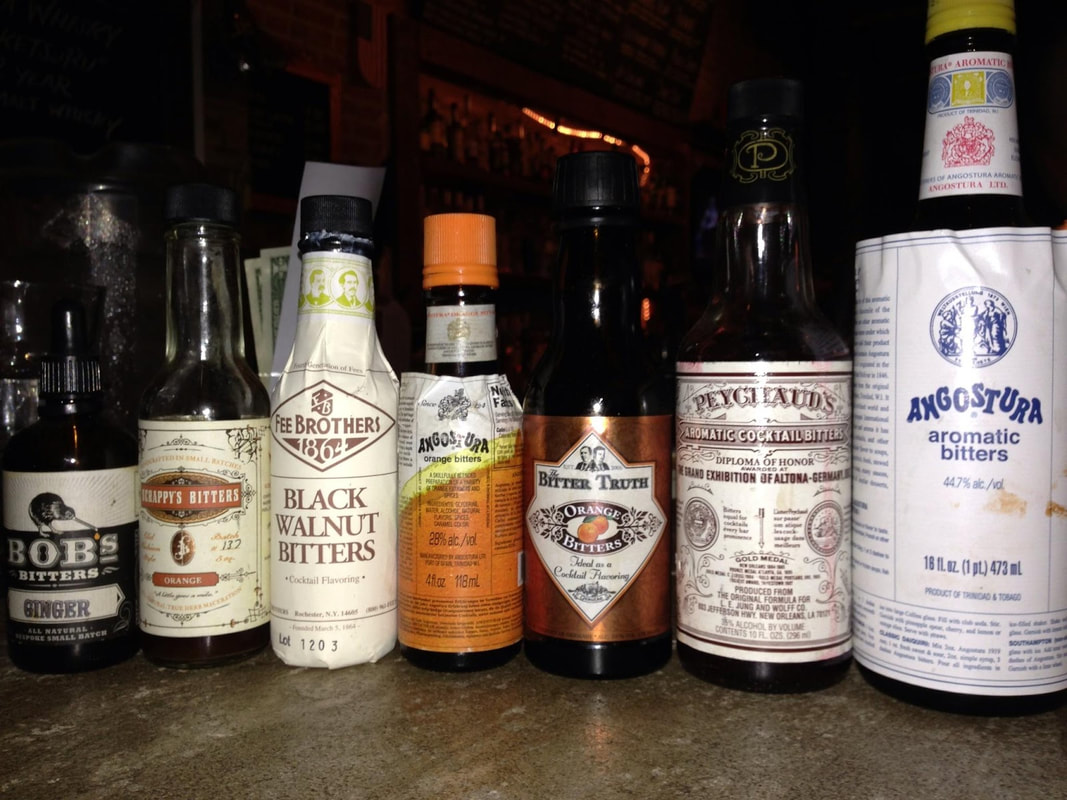 History: As no cocktail story is complete without it

​​Historically, bitters were used as a medical remedy to cure ailments.  Angostura Aromatic Bitters, for example, is still used as a home remedy for stomach aches.  Bitter's common "active" ingredients of gentian and chinchona bark, in particular, have their own listing on WebMD.com.  Brad Thomas Parsons, in his book A Spirited History of a Classic Cure-All, describes bitters addition to alcohol originated in the early 1700s, when the popular bitters of the time, Saughton Bitters, were added to Canary wine or bandy.    He further notes that the historical definition of the cocktail: bitters + spirit + sugar + water didn’t occur until the American Colonial period, when referenced by the Balance and Columbian Repository.  The bitters boom started in the 1850s and became a multi-million dollar industry complete with counterfeit copies.  Parsons’s attributed the rise of bitters to, as quoted from cocktail historian Dave Wondrich : ". . . it allowed you to claim that you were taking your morning drink strictly for medical reasons."

​Bitters = Base Flavoring + Bittering Agent + Alcohol (as a solvent)
There is a diverse set of base-flavoring agents for bitters.  Popular ones include orange, grapefruit, peach, chocolate, rhubarb and dandelion.  These flavoring agents are often the initial inspiration for bitters production.  Finding one or more complimentary bittering agents to accentuate the flavor nuances of the base ingredient(s) is the next step.  Common bittering agents include the aforementioned gentian and chinchona bark, as well as orris root and wormwood.  Yes, the absinthe wormwood.  Texas bartenders, Robert Heugel and Kevin Floyd, wrote a helpful blog post titled, How to Make your Own Bitters, with a list of basic bittering agents and their taste descriptions.  Once the multitude of ingredients are selected, the next step is maceration.

If operating without a recipe, macerating the ingredients in alcohol to extract flavor requires extensive trial and error to achieve optimal proportions.  The process can take weeks.  Procedurally, this is similar to creating an extract, except bitters are less concentrated.  Jamie Boudreau, a highly regarded barman and bitters expert from Seattle, in his blog post, How to Make Bitters, suggested blending single ingredient macerations, called tinctures, together to create bitters.  This provides better proportion control.  Lastly, unlike extracts and tinctures, bitters are . . . bitter.  At least they always have a bitter component.  In usage, the bitterness contrasts the sweetness of juices, syrups, and liquors in cocktails to create something bittersweet, an American flavor affinity.

<
>
Also known as cocktail bitters, are made without the sugar additive and are of a higher alcohol by volume (ABV).
Potable Bitters
Known as Amaro by the Italians, these bitters are aptly named because they can be consumed on the rocks or on their own due to their lower proof and the addition of sweeteners.  The potable bitters category can be further broken down into aperitif bitters and digistivo bitters.  The aperitif style, named due its traditional consumption as a before dinner appetite enhancer, consists of sprits such as Aperol, Campari and Cynar.  Similarly, digistivo bitters, such as Jägermeister, Fernet Branca, Ramazzotti, and Averna Amaro, are thought to aid in digestion.

Bitters, similar to extracts and tinctures, provide a way to evenly disperse flavors into a cocktail that cannot be added in their natural state.  For example, directly adding gentian root to a cocktail enhances your need for a toothpick without bestowing additional flavor.  Adding nutmeg does provide flavor, however, more often that not, the last half ounce of your cocktail has either no nutmeg, or is nutmeg sludge.

Oftentimes when composing a cocktail, if a particular bitters is not your inspiration, they get addressed last to fill in the gaps and polish the final product.  Potable bitters, used in 1/4 oz quantities or greater and aromatic bitters used in dashes due to their higher concentration, are generally approached to: Create depth and complexity of flavor, dry out the finish and leave the essence of the key flavoring agent(s) lingering on the pallet.

For the Professional Bartender:
Bitters in high-volume establishments quickly transform "club calls" into simple, satisfying concoctions for a nominal cost.  They can add a simple finishing touch, almost like Emeril's Bam! and instantaneously improve flavor, depth and complexity.  This becomes increasingly relevant as the American pallet evolves due to advancements in the culinary scene and the absorption of craft bartending into the mainstream.  Considering most bars already stock Angostura bitters, knowing how to administer the product already on hand benefits both you and the customer.  Why let bitters sit somewhere on the shelf, unused or under-utilized?  Bring them out! Here are some examples:


Whisky & Soda:
This can quickly become similar to the classic Old Fashioned by adding bitters and a touch of simple syrup.  The variation can use lemon lime soda or ginger ale instead because the flavor profiles mesh with the whisky and act as both sugar and soda in one pour.

Gin/Vodka & Tonic
A variation off the classic pink gin (gin + bitters) except stretched with tonic and lime, this dash over the top creates a cocktail fit for a chic, beach-bar feel.

Rum and Coke
Lime and two to three dashes of Angostrua transform this drink into a great drink for a hot Hawaiian night.

Ideas for the Craft Bartender
Many on the craft side are already familiar with bitters.  One thought particularly compelling is a comment from Bartender Tim Rita, Jr.  He noted that bitters can sometimes be viewed as the bottling of an idea.  The idea can be, but is not limited to, bottling the concept of place with flavor profiles associated with a native region of origination.  Angostura bitters flavors of cinnamon, clove, and all-spice are also major spices of the Caribbean.  The Japanese Bitters Umami flavor is another example of bottling an idea.

Another idea for craft bartenders is to use more robust bitters like Averna Amaro and Amaro Montenegro within the same though as Angostura bitters.  All this requires is the adjusted proportion of 1/8 to 1/4 oz instead of a few dashes.

Bitters have come a long way in the past few years due to the revitalization of classic cocktails and the evolving American pallet.  For those interested in taste, they become an essential element to your kitchen because of their ability to instantaneously create complex flavors within drinks regardless of alcohol content.  Start a collection with the easily accessible Angostura Bitters.  From there branch out into the drier Peychards  bitters as well as into Regan's Orange Bitters.

How to Make your own Bitters
Robert Hague and Kevin Floyd.
Posted July 26, 2008.
http://drinkdogma.com/how-to-make-your-own-bitters-for-cocktails/