Casa Sauza is truly a global brand.  It’s a confluence of 145 years of Mexican Tradition coupled with Suntory Beam’s Japanese manufacturing approach encapsulated and guided by the Japanese concept of Mono zukuri.  This has resulted in the embracing of technology, a strong focus on personnel development, to create a quality and well informed process of production with the end goal of a well crafted product.

Hawaii Beverage Guide was provided in-sight from Master Distiller, Fernando Avila about the Sauza Process.  We also learned more from casasauza.com which contains tremendous insight into the manufacturing philosophy and approach of the company.  This philosophy insight includes: Total Productive Maintenance (TPM), 5S and Lean, Just in Time Delivery and Kaizen. We highly recommend any distillery to read this if these terms are not familiar as they are the core of production philosophies pioneered in Japan but now used in most knowledgeable manufacturing facilities in all industries globally.

Location:
La Perseverancia distillery
in the town of Tequila in Jalisco, Mexico
Agave Cultivation
Sauza uses Micropropagation of agave plants to minimize disease in the field. This technique also allows the plants to root before the rainy season.


​Extraction
A diffuser is used to extract the sugars from the shredded agave fibers using a gentle extraction process.  The finer particles are then filtered to make hydrolysis more efficient. The resulting bagasse  is used as compost in agave plantations.

•Clean fresh agave notes are obtained (herbal profile).
•Consistent raw agave (fresh agave) note in the end profile
•Resulting juice will not have contact with contaminating sources for the rest of the production processes
•Water and energy usages are reduced with a favorable environmental impact.

•Consistent profile in the cooked juice giving well defined agave notes
•Undercooking and overcooking are avoided. No burnt notes are produced. Cooked juice obtained relates directly to agave notes without extraneous notes because of uncontrolled cooking.
•Avoids caramelization which can give a bitter note to the cooked juice
•A clean process with no sources of microbial contamination.
•Energy usage is reduced, and clean fuels are used.

Filtration technique varies by product. Filter options include:
•Cellulose plate. Made with a diatomaceous earth support filter + potential charge, which can be: filter plate with four holes at its ends, 16-cell cartridge.
•Carbon Plate with a mixture of powdered coal with cellulose mix. Can be built in 16-cell cartridges
•Bag filter. Constructed in polypropylene reinforced with an intermediate mesh of the same material to withstand high pressure.
•Spark plug and/or cartridge filters. Constructed in polypropylene, graded density depth, absolute denomination type, which can be: double open, with bayonet, with double connector O ring. Plus stainless steel cartridges of different microns.

Aging Vessel
•Material: All of the containers and barrels are made from American white oak with a smoky finish, which complies with the Sauza’s standards, and are used only for aging processes.
•Vessel Size: Varies. Barrels are 200L

Sauza Hornitos Plata
•Aroma: Entry note of amber musk, Grassy and green herbaceous with a touch of lime oil on the end.
•Palate: Enters grassy and green before dropping into a base of sweet fruit (B-damascenone ). As it dissipates it moves from higher notes which are more herbaceous, slightly sweet, and somewhat bell pepper like before hitting the musty, woody furfural/methylfurfural notes on the finish. This differs from an oven made tequila in that it does not have the smoky or vanilla notes provided by the pyrolysis of lignin.
•Cocktail suggestion: This tequila is herbaceous in a way that pushes it towards a cilantro and lime pairing. Then, as it is robust, hit it with spice or a tajin rim as the dried chili will interplay with the musky flavors.
​Sauza Hornitos Reposado
•Production notes: 2 months in oak vasts
•Aroma: Top herbaceous note dives into a dried apple aroma (B-damascenone).
•Palate: It starts with a musky and herbaceous top note, then drops into the apple (B-damascone) character and a perceived touch of vanilla (though vanillin is probably not used prevalent due to the usage of foeders). It then finishes with a muky top note underlaid by banana (amyl alcohol) while maintaining an herbaceous, rosemary like quality.
•Compared to Hornitos blanco: The fruit flavors (B-damascone) are more prevalent. Given the duration of aging time and the usage of foeders, it might be more due to the approach to cuts in distillation than it is to the aging process. The difference in aroma could also be due to the exposure of the tequila to oxygen similar to the approach to the usage of foeders in winemaking, and is similar to that discussed in our previous article on agave, which can be found at hawaiibevguide.com/agave-spirits. This seems purposefully done as hornitostequila.com says the technique is used to “ensure minimal contact with the wood, giving it a livelier agave taste than most wood-treated tequilas.” This we take to mean that there are fewer oak notes of baking spices, and vanilla. Other changes could also be due to additives, though we cannot confirm if they are or are not used. However, outside of caramel use only for color adjustment, any additives if used would be minor as the blanco and reposado are very similar.
•Cocktail approach: Melds nicely into baking spice notes without the caramel sweetness. With that said, cola, especially Mexican Coke that is then layered with dried and smoked peppers, possibly dried poblano or chipotle, would work well at connecting the dots. 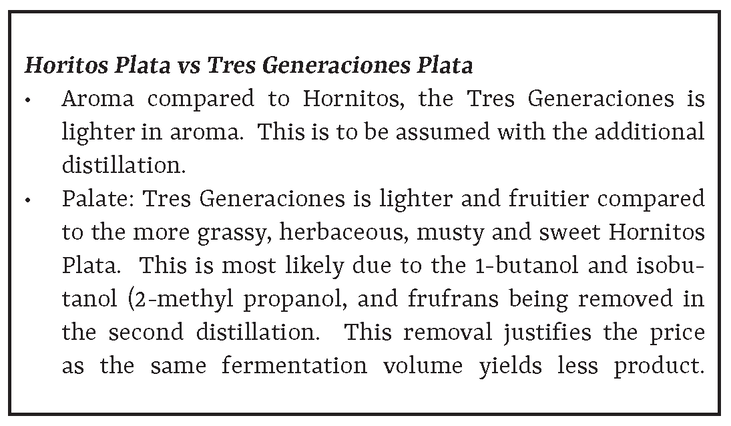