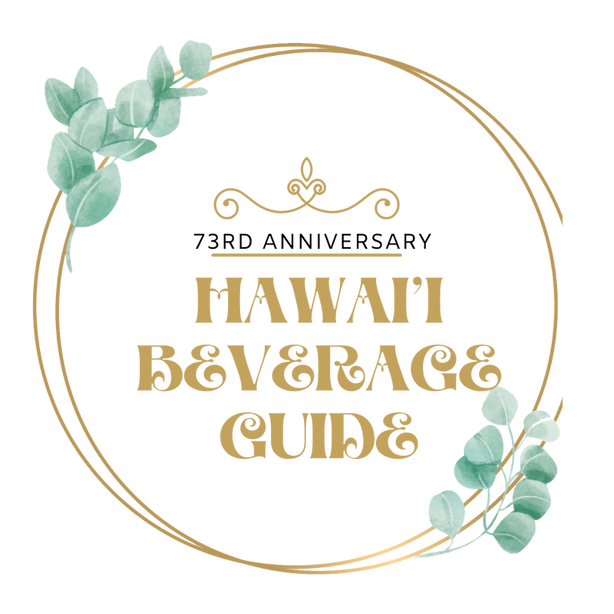 Celebrating seven decades in publication
Seventy-three years! What an absolute blessing to be at the helm of such a magnificent vessel that is, Hawai'i Beverage Guide. What started as a thin pamphlet to spark a conversation of transparency between distributors and the local industry birthed a magazine that for the last seven decades has used its platform to educate, inform and support those within our community that wish to know more about the industry in which they serve on a empirical level. Though small our influence on the local beer, wine and spirits commune has been mighty and we pride our steadfast longevity on the unweaving belief that: Success is built upon the foundation of shared knowledge. Brent and I look forward to continuing to lay that foundation.
-Crystal Arnold-Nakano, Assistant Editor
*​We would also like to extended a huge Mahalo to our Nakano/Suzuki Ohana (Harvey, Delia, Alicia and Scott) and Friends (Frances Boydstun, Tracy Chan and Ryan G.) for which none of this would be possible without the help of you all. We thank each of you for the many hours spent: editing, researching, bonding and cutting magazines among the many other countless and selfless acts of support! We are eternally grateful to have each of you in our lives and in our corner!
As Hawaii Beverage Guide moves into its 73rd year of publishing we reflect on the editorial direction from a philosophical perspective. Hawai’i is different from the mainland in that multicultural is not just a community of hundreds or thousands of people but rather an immediate family. Take myself and Crystal for example. We alone cover Japanese, Filipino, African-American, Caribbean, and Native American cultures. In our conversations at home, a recurring theme is the beauty of understanding culture from a historical and sociological perspective and being in a community in which celebrating the cultural traditions of other people like jai and gau on Chinese New Year is more the norm than the exception. However, that is not to say that Hawaii is perfect in this regard, there is still much to be learned and changed collectively. Especially with those coming to the state from the mainland and abroad who do not understand the values of Hawai’i.

From a macro perspective on food and beverage, we believe the beauty of the culinary world is the intersection of science, socioeconomics, art, culture, and history. Every dish or beverage, artisanal or mass produced commodity is existentially influenced by each of these factors. Because of this, our goal is to take the same approach to Hawai’i Beverage Guide. Hopefully, this is reflected in the following article series that we have produced over the past few years: Series on Winemaking and Guides to rum, agave spirits, mezcal, sake and beer which focus on the technical and scientific execution of the production of flavor. The Guide to Pricing Strategy which is part of a series on business fundamentals from a technical perspective.

The Guide to Japanese Flavors which starts a series where we will be exploring the history and ingredients of a culture. Ultimately, we hope to provide food and beverage professionals with a foundation of knowledge from which to further elaborate on, thereby better enabling them to share their perspective. Hopefully, through this, we as a community can help people connect across cultures and experiences on a more personal level.
-Brent Nakano, Editor