Marcus Bender, once known in the 1970s as the “Silken Prince” for his retail collection of classic “aloha shirts” and hand-made leather goods, is now a Beverage King.  He’s been in the beverage world for 40 years and has been a player in Hawaii’s craft beer industry since before there was a craft beer industry. His involvement started in 1981 when he became the exclusive importer of Hinano Tahitian beer to Hawaii.  After purchasing Hansen Natural Beverages and selling it three years later, he remained on the Board of Directors for another three years. Marcus founded Hawaiian Springs Water, the first natural bottled water, from his Keaau property on Hawaii Island in 1992.  However, he wasn’t done with beer. The opportunity to purchase Brew Moon, a 300-seat microbrewery restaurant, was in the stars. The restaurant saw seven years of great beer, ono food and nightly entertainment. Marcus sold Brew Moon to focus on Kai Vodka, his spirit business with international reach.  Launched in 2007, Kai continues to delight consumers. Fast forward to November 2018 and his most recent venture. Marcus became the owner of a brewery on East Hawaii Island where he has been doing business for decades.
<
>
A serendipitous series of events lead to the creation of Hilo Brewing Company.  Marcus recalled, “The owner of Hawaii Nui and Mehana (now retired brands) was looking to exit the industry.  He was a medical doctor by trade and lived outside of the State. For many years, I contemplated opening a Beer Garden on my Keaau property just 10 minutes from Hilo, so I was happy to acquire these assets – the equipment and the trademarks.  I decided that this was a good opportunity to get back into the beer business and to try and establish a local brand in Hilo with a new brewer. My vision was to completely change the brand from Mehana and Hawaii Nui to Hilo Brewing and create something very Big Island-centric and very focused on the East Hawaii market. I also wanted to have a hometown beer and other products that the residents of East Hawaii Island can enjoy and be proud of.  New team, new package, and great new beer. Hilo Brewing Company’s beers are top-notch and now put Hilo on the craft brewing map.”

Marcus further added, “We made a lot of improvements to the operation, and our Director of Operations was key in perfecting the facility.  I’ve known Ash for over a decade; he has an entrepreneurial spirit and was the perfect addition to our team.

Johnson Brothers of Hawaii had the previous brand and they were about to get out of the beer sector altogether, but when they saw and tasted the new brand, they wanted it.  We were thrilled to have Johnson Brothers as our partner; they are good people.”

According to Marcus, “Hilo Brewing is recognizable and puts us on the map – literally.  Why Kona Brewing? Why Waikiki Brewing? It's simple and straightforward and tells the consumer where [the beer is] from and where the beer is made.  Hilo is full of heart and we are proud of our community.”
Key People


Sebastian’s Brewing Background
Marcus knew Hilo Brewing’s success would be in delivering new recipes and consistent quality.  Creative direction was a team effort with Ash being deeply involved in the rebrand, and the beer being totally revamped by Brew Master, Sebastian Bach.  Sebastian, a San Diego Native, grew up watching his father regularly visit Craft Beer Mart (now Ballast Point) for homebrewing supplies. Shortly before Bach’s 18th birthday, Stone Brewing Company released its Stone IPA.  According to Sebastian, “That was a phenomenal and momentous year in the craft beer industry in California. It’s partially what gave me some inspiration to become a craft brewer.  A generation of beer drinkers was defined by the introduction of their West Coast IPA, which went on to become one of the highest-selling beer styles in the world. Me being there for it all definitely had an influence on my decision to become a professional brewer.”

Days after turning 18, Sebastian purchased a one-way ticket to Europe to learn and experience craft beer.  For two years, he studied beer by working every imaginable role in small breweries and equipment manufacturing facilities.  His European apprenticeship culminated at the Hofbräuhaus in Berlin where, though sweeping floors and polishing tanks, Sebastian said he was exposed to “the process of brewing and the passion of the craft.”
After leaving Europe, Sebastian returned to California and worked at a couple of different breweries.  However, after a few years, he needed a change in scenery. As fate would have it, he booked a one-way ticket to Hilo seven years ago. Since then, Sebastian has worked at other Breweries on Hawaii Island.  Like so many things in life, timing is everything. Marcus explained, “As I've learned over the years, it's really nice to be able to find somebody that's both qualified and lives in the place that you're operating. When importing people from the mainland (and there's no shortage of brewers there) [I had to] get them acclimated to living in a new environment [which was] a big challenge that I struggled with. By good fortune, I met Sebastian, who has a long history in brewing, and asked him to join us. After he understood what our mission was, he agreed.  It's good fortune is all I can say.” 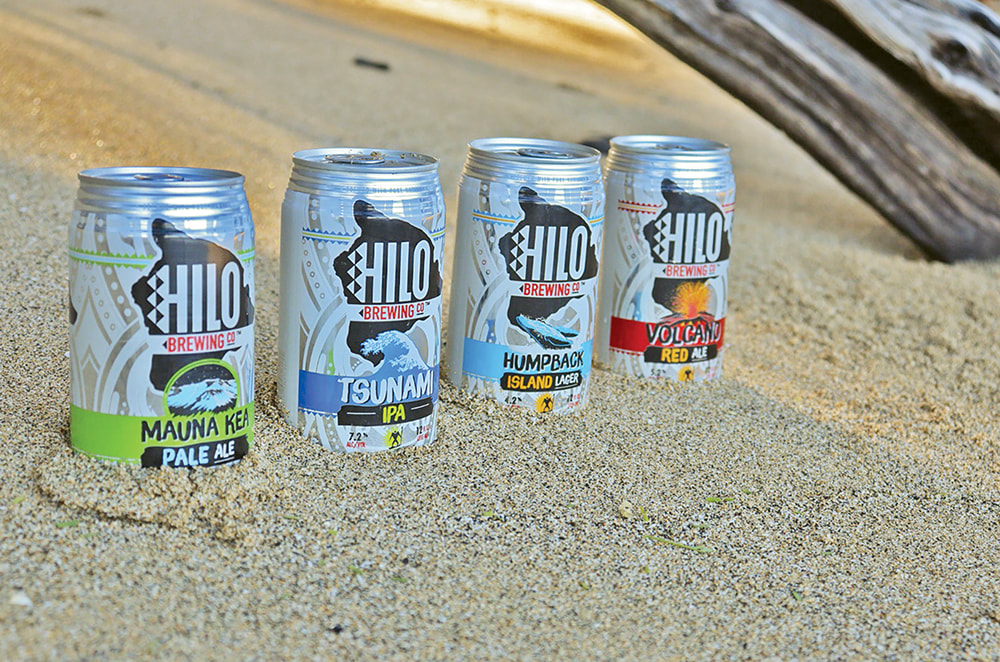 <
>
Hilo Brewing’s approach to beer is influenced by Sebastian’s background, which is entrenched in Old World European techniques and traditions, but stylized by the West Coast spirit of experimentation in brewing.  He noted, “it's important for me to source that ingredient where it should truly come from, per beer style, rather than just accepting the American substitutes.” He also explained, “I've always believed if you're going to make beer, make it to beer certification style guidelines, which all national competitions base their scoring off of.  It’s important to make beer that can compete on a national level and gain national recognition. In doing so, consumers get educated about what Hawaii can offer. We have the luxury of, in my opinion, being able to be a little more explorative and experimental. I feel our breweries have the opportunity to define what craft beer in Hawaii really is. If there's a West Coast IPA style, why not a Hawaii IPA style?”

Currently, Hilo Brewing is focused on its core beers: Humpback Island Lager, Mauna Kea Pale Ale, Volcano Red Ale, and Tsunami IPA.  Though similar in name and style to their predecessors, the recipes are completely different.

Marcus has a long legacy in East Hawaii with his founding of Hawaiian Springs Water nearly three decades ago.  His daughter, Amy, also has Hilo in her heart. Coincidentally, during her time with PepsiCo and Blood Bank of Hawaii, she was responsible for the Hilo territory.  Amy said, “Hilo is in our family’s tapestry. It's not every day that you come across the opportunity to purchase a brewery and know what to do with it, so it was serendipitous that it happened to be in East Hawaii where we already have roots, and that Sebastian was available to come on board at the right moment.  I love Hilo.”

Hilo’s beer consumption per capita is double that of Honolulu’s.  That alone deeply influences the brand. Amy noted, “We want to be a part of the community, and for that reason we enjoy participating in local events, supporting local non-profits, and  welcoming the public to our tasting room (located at 275 East Kawili Street). KTA, Hawaii Island’s very own chain, has been immensely supportive of Hilo Brewing Company.”

<
>
Hilo Brewing’s malt styles are done on a per-recipe, per-style approach; however, the general philosophy is to use American two-row in American Ales, whereas German style beers, like the Humpback Lager, use European malt.

Hops are procured in small batches through sources like the Lupulin Exchange, instead of contracted out.  The goal is to find the best hops possible. Sebastian notes, “It gives us the ability to fine-tune our hops to a more specific source, per farm, as opposed to having bulk inventory from a supplier.  We use European noble hops, and those items are sourced from Europe. There's also a lot of great hops coming out of Michigan now, which is a new region for hop production.”

Hilo’s water comes from the Mauna Loa Aquifer, which is replenished with 300 million gallons of fresh rainwater every day.  The water is naturally filtered through layers of lava rock. It’s then lightly carbon-filtered, leaving naturally occuring minerals but removing any chlorine that may have been used.

Hilo Brewing’s goal, like in old world brewing, is to brew beer that’s appropriate with the type of water you have available.  Sebastian provided the following insight, “In my analysis, Hilo has some of the best brewing water that I've ever seen. When you check the mineral contents, it has similar profiles to some industry-standard beers. There's a reason that Czech Pilsner comes from the Czech Republic. There's a reason that Guinness comes from Ireland. There's a reason that Hilo Golden Ale comes from Hilo.
Hilo Brewing uses the old-world technique of adjusting pH with acidulated malt instead of acids or salts.

Yeast is sourced from White Labs, and there is a house ale yeast and a house lager yeast.  To propagate successive yeast strains, a small amount of fresh wort is saved in a clean keg.  Then, Sebastian calculates how many millions of cells are needed per volume of yeast. In order to minimize flavor drift, Hilo Brewing Company has made a decision to carry out its yeast six generations. For quality control, yeast is harvested off each fresh batch, with a portion checked for vitality via counting D Cells on a Hima Hydrometer under a microscope.

Filtering
The beer has long watering and conditioning times to properly flocculate the yeast.  According to Sebastian, “Allowing a beer to condition properly for the right clarity retains more of beer’s flavor as opposed to polishing or filtering it, which tends to strip out some of the flavor, the oil, the essence and the presence of the beer; it can make the beer seem a little generic and more of a commercial offering.  Although we are a commercial brewery, we want to offer a more dedicated approach to the brewing process.”

Seasonal beers are in the works.  Like the reworked flagship beers, they will be completely different than their predecessors of the same name. According to Sebastian, “One amazing thing about being in Hawaii, especially on the Hilo side, is our abundance of fruit. Our Hilo Golden Ale, available right now in kegs and eventually in cans, is brewed with whole-fruit pineapple. No concentrates, no syrups, no frozen fruit juice. It's just fresh, whole pineapples. We're also going to be working on a continuous IPA tap, (a small-batch IPA release tap) so at any time, customers will be able to come to the brewery’s tasting room and there will be a tap with just our experimental IPA. People can try it and give us their opinions. That's how we'll experiment with upcoming products and have the community participate.

Product Availability
The initial product rollout will consist of kegs on Hawaii Island, and cans for both retail and on-premise sites across the rest of the state.  Hilo Brewing is distributed by Johnson Brothers of Hawaii. According to Amy, “We are excited for visitors to taste what Hilo has to offer and take those lasting memories back home.  We want kama’aina to enjoy our beer at home or with friends during tailgates and potlucks in the spirit of Hilo -- all about community. We also want consumers to be able to delight in the tasting experience at bar and  restaurants that support local business. You are having an authentic, locally made experience when you enjoy Hilo Brewing beers.”


Up Next
Hilo Brewing is working on switching to a Class-18 license.  It will provide the opportunity to open Hilo Brewing Company's second location for a taproom.