Lemon Hart & Son has been an influential brand for the past 200 years.  It rose to prominence in 1803 as the official rum of the British Royal Navy.  It then became an essential ingredient in tiki cocktails like the Zombie (with the help of Don the Beachcomber), 151 Swizzle, Navy Grog, and is still faithfully used at the iconic Mai-Kai Restaurant in Fort Lauderdale, Florida.  Hawaii Beverage Guide was fortunate enough to interview Master Blender Michael Booth and Brand Ambassador Miles Vrahimis to learn more about the brand.

<
>
Approach to Rum
Rum is a strange category because of its loose rules. The Real McCoy Rum seeks to provide transparency in the production process and age statements that are akin to whiskey instead of a marketing ploy. This means:

In July, 2018 for the first time ever, a rum won the International Spirits Challenge’s Supreme Champion Award. That rum was produced by fourth generation Barbados rum distiller Richard Seale. Beyond this win, Mr. Seale is known for producing highly coveted and collectable bottles due to the qualit y and value that he produces. His Foursquare Distillery in Barbados, is known for producing “The Pappy of Rum”, according to Fred Minnick’s article “Velier Foursquare 2006: The Greatest Rum I’ve Ever Tasted” (https://www. fredminnick.com), and referenced by Matt Pietrek’s “How Foursquare Became the Pappy of Rum” for Punch Magazine. The distillery is also the last locally owned Barbados Rum Distillery. Unlike private labels that source through a rum broker like E&A Scheer in the Netherlands, Real McCoy is a “private label” directly from the Foursquare distillery in Barbados.

<
>
40 hour long molasses fermentation occurs in a pressure and temperature closed top fermenter and uses proprietary yeast. This guarantees a consistent molasses wine (fermented molasses), as no “unwanted” yeast or bacteria enters the fermentation tank. Richard Seale puts heavy focuses on creating the qualit y of the “molasses wine”.
Distillation
Both pot and column Forsyth Stills (http://www.forsyths.com) are utilized to create two different distillates. Column provides a clean distillate, and the pot still provides rich flavors and aroma. Forsyth stills are also produce Yamazaki, Glenlivet, and Glenfiddich
Maturation
Oak casks from American Whiskey production are used for aging. What separates The Real McCoy from other spirits is that none of the ages are blended. The age statements on the bottle follow Scottish laws in that the age statement is the youngest eu de vie. For the Three Year, all the product is aged three years. For 5 year old, all the product is aged 5 years.
Note that rum has a particularly high Angel’s share, so at 12 years, there is only 1/3 of the original liquid left in the barrel. After maturation, barrels are blended together and Barbados spring water to bring to proof.
Blending
The column still and pot still distillates of the same age are blended together in the Scottish model of creating a light distillate for aging and heavy distillate for aging. 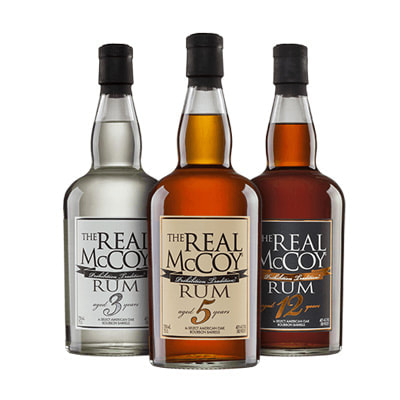