<
>
Founding Story
RHS is rooted in Czech distilling tradition.  Unlike in the United States where grain or grapes are traditionally used as feedstock for distilling, the Cezech Republic and other Central European countries use fruit.  Kon explained, “these pálenka distilleries are also called Pálenza, which is derived from the páliť meaning under flame or under heat.  This refers to how heat is applied to the liquid during distillation.”  Kon comes from a familial background of not distillers, but fermenters. “My family did not distill, but we did fermentation during harvest season of apples, plums, berries or anything else that could be used as flavor; this made wine or beer.  Every village had a distillery, so you could distill whatever you needed [from your fermented fruit].” As it turns out, the village distilleries, though regulated by the government, were often owned by the local gardening clubs and have become a way to utilize any fruit that was not going to be eaten.

Inspired by this approach to produce along with the abundance of tropical fruit in Hawaii, Kon opened RHS in 2015.

Company Name
“There was a Royal Hawaii Spirits before, but it was for funerals.  I wanted something that you could trademark with less resistance.” Though not necessarily the most inspiring of stories, Kon has had his challenges.  “At the beginning, I wanted to use Hoku, but the daughter of Don Ho is claiming that the whole universe of Hoku [usage] is named after her. The only way to get this name is to fight for it through an attorney, but still nothing is guaranteed.  So, I am RHS, or Royal Hawaii Spirit as a trademark. For the mainland, I have a Captain Cook brand. I’m now picking a fight with Diageo because even if you say Captain Cook, they will always claim it’s in conflict with Captain Morgan even if the product is not a rum and Captain Cook is an explorer and their guy is a pirate.  But, it ultimately came down to where there was a least amount of resistance as now-a-days everyone has a similar idea.” 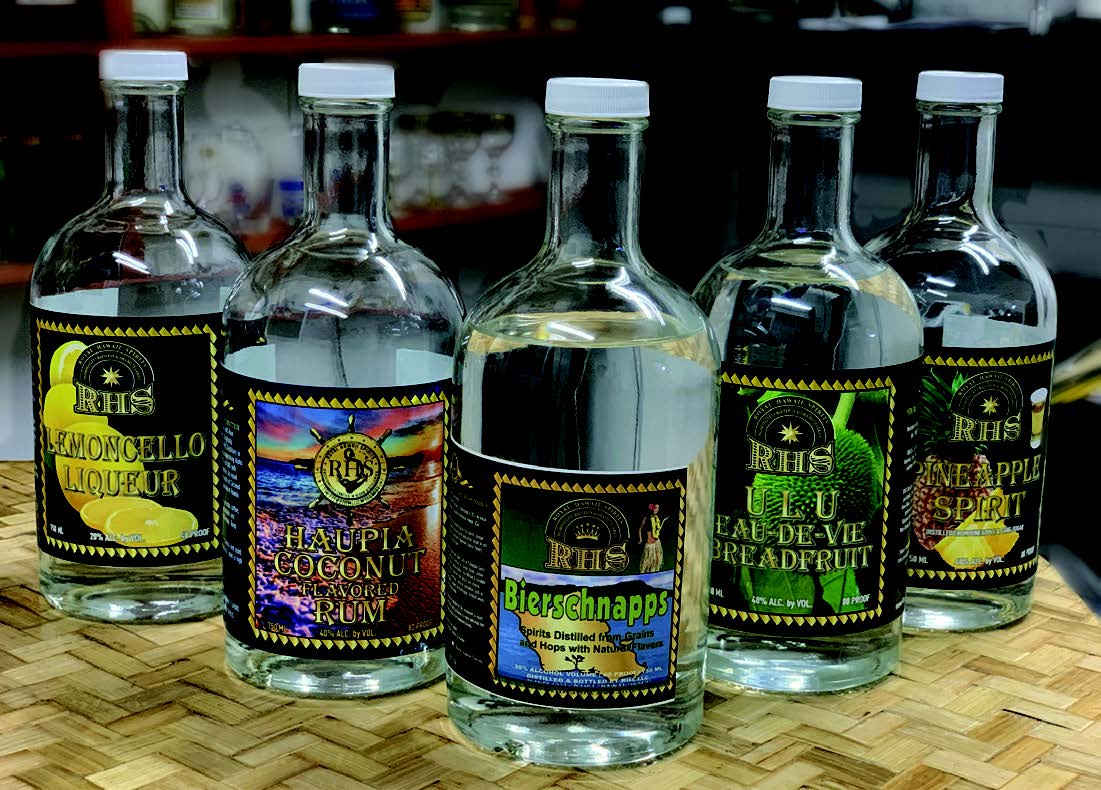 Yeast
“I experiment with yeast, but I stay away from Turbo yeast because it doesn’t taste good. If I’m making a basic recipe (for a test batch), then I’ll use baker’s yeast, but you don’t get the yield you're looking for.”

Ingredient sourcing
“I use whatever I can get my hands on.  If it’s gin, then ‘ll source juniper berries from Europe.  If it’s a local ingredient, then it’s 100% locally made. This is what I’m hoping for from the breadfruit and other ingredients. The potatoes are from Idaho, and the rice is from California or Japan.”
KEY Products

Ulu Breadfruit Spirit
The breadfruit is from a Kailua-Kona Co-op.  Kon is also experimenting with breadfruit flour for more of a vodka-style spirit.  “I’m hoping that it [breadfruit] becomes like the tequila of the Pacific. And hopefully, we can commercialize breadfruit production.  Breadfruit also makes very good beer.”

General production approach
Breadfruit is pureed, then boiled at a high temperature to convert the starch into sugar.  When it cools down, yeast is introduced.

Hula Girl Vodka
The vodka is sometimes made through a secondary distillation of the pineapple spirit.  There is also the option for the vodka to be made with barley, corn and rice.


Hawaii Mule
The Hawaii Mule uses a base of rum made from sugar syrup with ginger liqueur and honey with a touch of sugar.

Kona Mule
The Kona Mule is a Kauai coffee liqueur mixed with ginger spirit. Ginger spirit is made from distilling ginger and sugar cane.  Big Island honey with a little sugar is added as a sweetener because according to Kon, “If you don’t add the sugar or the honey, then you don’t get the depth of the flavor.”


“The good news is that although you cannot mix ginger with coffee (because it tastes terrible), if you add it [ginger] as a spirit after first sweetening the coffee with sugar, you’ll get the kick of the ginger.”

Lemoncello
Citrus spirit infused with citrus zest
RHS can do variations on lemoncello from lemon to lime to calamansi or a combination.  Kon notes that he does not do traditional Italian limoncello, which uses grappa as a base; nor does he use the homestyle technique in which citrus zest is infused into vodka and then sugar is added.  Instead, he distills the lemon, infuses the zest, then adds sugar, honey or both.

Bierschnaps
Bierschnapps is distilled beer.  According to Kon, “It mixes very well with beer and I think that every brewing company should have their own spirit distilled from their own beer.  If their beer has hops and is bitter, then you can get bitter flavors. If it’s more citrusy, then you can get nice citrus and floral flavors. It also works well as a no-carb beer.”

For a brewery interested in having RHS make Bierschnaps for them, according to Kon, “if the brewing company is licensed for sales outside their sales room, then they can transfer the product in bond to RHS.  If they are not, like a gastropub, they can create a beer recipe and give the unfermented wort to RHS (since there’s no alcohol), and then Kon can ferment and distill the wort. According to Kon, “If a brewery has extra production, distilling it could be a way to subsidize their income.”