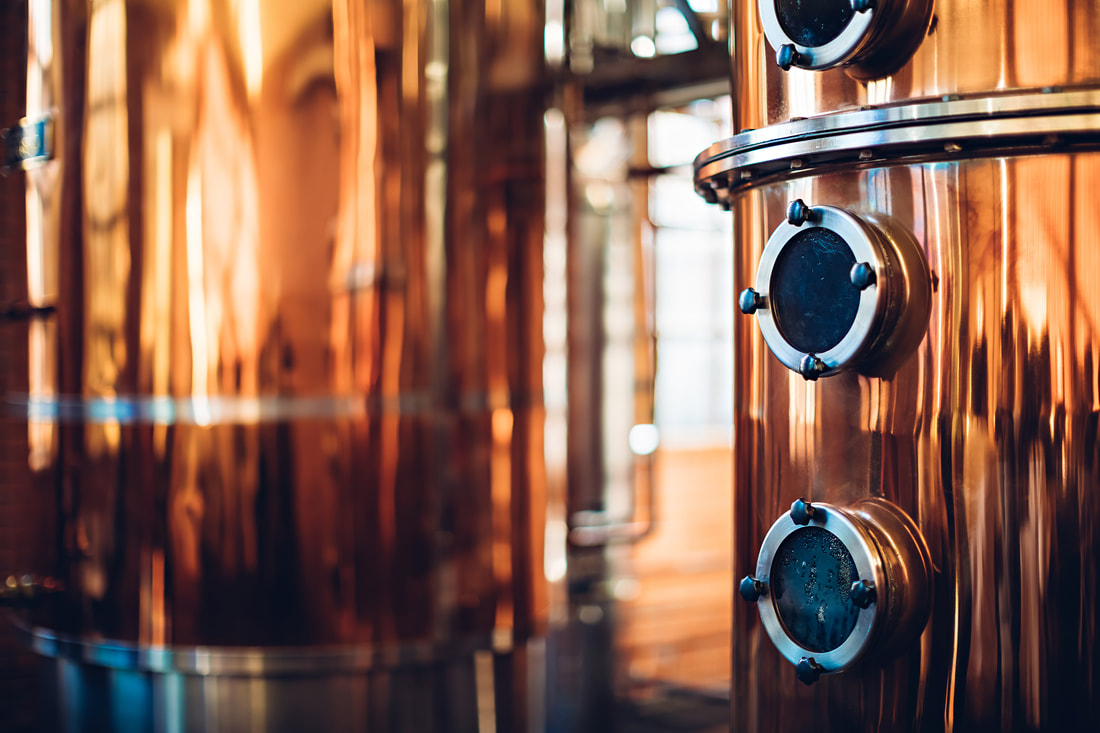 A Guide to: Distillation

Distillation is the process of separating and removing alcohol from the fermented liquid of agricultural raw ingredients.  This technology has changed over the centuries as the understanding of physics and chemistry has improved.
Some products claim to be over 3 times distilled, yet this can be somewhat misleading. According to the 27 CFR § 5.42 (b)(6) - Prohibited Practices: “Distilled spirits may not be labeled as “double distilled” or “triple distilled” or any similar term unless it is a truthful statement of fact. For purposes of this paragraph only, a distillation means a single run through a pot still or a single run through a column of a column (reflux) still. The number of distillations may be understated but may not be overstated.” Commonly whiskey, tequila and some other spirits are double distilled in a pot still, which means they have run through twice. When it comes to vodka, products marked “ over three times distilled” are highly​ variable in their claims as to what they call a distillation cycle, and will sometimes refer to the number of plates in a distillation column as they are “counting” the number of times the spirits has vaporized and condensed. It may also refer to the number of columns in the distillation run.
​Separation by boiling point (Cuts) 5, 6, 7
After reflux has helped to separate out the different liquids from the azeotropic mixture, they need to be collected. This collection is done by varying the temperature of the distillation run to group compounds by boiling point.  Though many of these compounds are in the final distillate, the distiller is selecting for quantity of the compound.  In distillation, these groupings are called:

Feints
The heads and tails that are set aside are collectively referred to as the “feints.” These may be added into the wash on the next run, can be distilled by themselves, or blended back into the hearts portion.
Pot Still with a Reflux Column, aka Hybrid Still
A pot still with either a conjoined column attached to the top of the pot, or adjacent and separate to the pot, and connected via the lyne arm known as “side columns.”  Within each column, there are two different approaches to creating reflux: Using packing material or using plates. This still is commonly found in modern craft distilleries because it provides the flexibility of distilling different spirits. It can be run as a pot still by disengaging the columns or engaging one or more reflux columns.

Column with Packing Material
The column is stuffed with removable material which impedes the path of the alcohol vapor and creates reflux. The packing material depends on the type of product the distiller is trying to make, and can be a variety of materials, including stainless steel mesh, copper mesh, ceramic or glass in the form of marbles or Raschig rings.  Using packing material is not as controlled as using bubble plates.

Bubble Plates
Bubble plates are perforated, but they have bubble caps that allow some vapor to pass through and the remainder to recondense on the bubble cap.  The liquid then drips back down through the column to be vaporized. This high quantity of reflux enables a still using bubble plates to create a much higher proof distillate than other methods of batch distillation.
Turndown ratio:  Ratio of minimum vapor load to maximum vapor load
Bubble caps have larger turndown ratio
Perforated plates have smaller turndown ratio
“Downcomer” tube/pipe: Tube that allows the condensed liquid on one plate to flow back down to the next plate or main pot.  If side columns are used, there is often a pipe that returns condensed liquid back to the main pot for redistillation.

For more on the physics of batch column stills:
http://cocktailchem.blogspot.com/2019/01/the-physics-of-batch-column-stills-and.html

Common in the distillation of: Shochu, gin.
In shochu, pressure is lowered so that alcohol vaporizes at 104-140°F. Oxley Gin, instead of applying heat, lowers the pressure until alcohol vaporizes, which is at the temperature of -5°C.  The vapor path leads to a -127°C condenser, which changes the vapor back into a liquid.  In this process, no heads or tails are created.

Rotary evaporators are used to vacuum distill small quantities of heat sensitive botanicals which are blended into a pot or column distillate.

Process
Wash is constantly pumped into the top or middle portion of the column where it flows downwards towards the bottom of the still.  As it does, it is heated by steam which is injected from the bottom.
Eventually the alcohol gets heated enough to vaporize and travels up the still. As it travels, bubble plates cause reflux.
​
Alcohol is extracted at the top, the water with the “stillage” remnants accumulating at the bottom.
For the history of the column still read
Strengell, Teemu. History of the Column Still, 1 Aug. 2013,
whiskyscience.blogspot.com/2013/08/history-of-column-still.html.
​
Kentucky Still, aka Kentucky bourbon Still
The Kentucky still, common in midsize to large distilleries, is a modified version of the Coffey still. According to Steven Cage: “While the original Coffey still was designed to produce a mostly neutral spirit, the Kentucky still removed some of this function so as to have a slightly lower proof output (at most 80 proof), and much more flavor. The two designs are more than kissing cousins, they are directly related, taking into account what Coffey learned and published from his initial work.”

Process 12
The wash is fed into the still above the first sieve tray and begins its downward descent, meeting steam and separating alcohol from water.

​The alcohol vapors are often fed into a doubler or a thumper.  These are used to redistill the spirit and to provide copper interaction for stills that are not made of copper. The vapor coming out of the doubler or thumper is then led into the condenser, and the resulting distillate is known as 'white dog.'
The 'stillage' is processed into animal feed and 'sour mash,' which is reintroduced into the fermentation process.

12. bishopshomegrown. “The Reason Why Your Whiskey Can and Should Come from Pot Stills, Column Stills, Chamber Stills, Alquitars, Pots with Dephlegmators, Coffee Stills, Pots with Retorts, and Hybrids. Or, How Arguing Pot vs. Column Will Never Broach the Complexity of the Distilling Arts.” The Alchemist Cabinet, 30 Jan. 2019, www.alchemistcabinet.wordpress.com/2019/01/25/the-reason-why-your-whiskey-can-and-should-come-from-pot-stills-column-stills-chamber-stills-alqutars-pots-with-dephlemators-coffee-stills-pots-with-retorts-and-hybrids-or-how-arguing-pot-vs .


Thank you to Steven Cage for the tremendous insight into distilling!