1864 to 1873: During this era, sugar achieved first place on the Philippines' list of exports; it continued to vie with abaca (Manila hemp) for that position throughout the rest of the 19th century.

1874 to 1883: Tanduay won its first international award in 1876, a gold medal from the Exposition Universal, in Paris, France.

1934 to 1943: Gen. Douglas McArthur ordered the closure of all distilleries and the Japanese Imperial forces occupied Tanduay, Quiapo.

1944 to 1953: Upon Manila's liberation, servicemen queued up from the Tanduay Quiapo gate to the vicinity of San Sebastian Church to buy rum.

1965: The first batch of Tanduay Rhum Five Years was harvested.  The product earned its first two medals from Monde Selection in 1971.

1975: Tanduay co-founded the Philippine Basketball Association in with its own team.

2006: Construction of the El Salvador Plant.

2013: Tanduay Asian Rum was launched in the United States.

​Tanduay is unique in the high-volume rum business because production is completely vertically integrated within the Lucio Tan Group of Companies (LTG), starting from the sugarcane production (Victorias Milling Company), distillers (ADI and Aisan Alcohol), down to the production facility (TDI). All of the production companies are based in the Philippines.  “That alone is a great picture of how the heart and mind of the product is truly and proudly Filipino! And having received more than 200 international awards and accolades is a true manifesto of the quality and hard work of every Filipino that put their efforts in making an excellent rum product,” said Tanduay Rum.

Tanduay’s approach to distilling is a combination of the R&D team’s careful study  of the global rum industry’s changing taste preference, the diverse cultural heritage and flavors of the Philippines, industry best practices, and a 16-decade-long legacy of perfecting rum making.

The development of new products starts with the R&D team closely collaborating with the Business Development team to come up with a liquid that would best satisfy the target market. “We [first] try to define in which market we would want to sell the product. Other than the market preference, each country has regulations that we need to consider. If we can get a story, we can find the ingredients to match the story; we can blend according to a story.  We then [take into account] the scale of the project, which includes the expected number of cases to be produced, and if a product will be released as a limited edition. This helps our Master Blender decide on which spirits and aged rum reserves we can and cannot use.  We [also blend] very old rum or something a little younger as well as consider the color, [be it] white, gold or dark rum. That way, we can select the right base, ingredients, and compounding and filtration procedures,” said Tanduay Rum.  Ultimately, the diversity of distillery plants and aging warehouses enables the production of rum in many different styles, flavours and tastes.

​Stylistically, the Philippines is influenced by many cultures, but no influence was as great as that of Spain’s.  “The company was built in the later years of the Spanish colonial period. During this time, Spanish rum took hold. Rum making had just started to take shape in the country, so our rums are traditionally Spanish in style, which tends to make them light and sweet,” said Tanduay Rum.

<
>
Molasses
​Heirloom sugarcane is harvested after 10-12 months and sent to the Victorias Milling Company (VMC) in Victorias, Negros Occidental, one of the biggest producers of raw and refined sugar in the Philippines. VMC currently holds the biggest share of refined sugar production in the province of Negros, and in the rest of the country as well.  VMC’s sugar operations consist of two mills:  The VMC Walkers Mill or the “A” Mill, designed by Walkers Limited of Australia, with a grinding capacity of 10,000 tonnes of sugarcane per day. The other is called the “C” Mill, designed by Farrell Company of Hawaiʻi, with a daily grinding capacity of 5,000 tonnes of sugarcane.  VMC also has a Raw House capable of processing 15,000 TCM daily and a Refinery capable of producing 25,000 to 27,000 50-kg bags of refined sugar daily. (Info from https://www.victoriasmilling.com/).

The molasses is yielded from cane sugar production. Cane sugar is obtained by successive evaporation, crystallization and centrifugation. Both the sugar extraction and the sugar refining process yield molasses, and each step of these processes output specific types of molasses.

The Grade A molasses used in the production of Tanduay has a Brix of approximately 85 °Bx. Beyond sucrose level, which is around 32-42%, the total fermentable sugars in the molasses (which also includes glucose and fructose) is determined to be about 55% w/v.
Water
​​Raw water from deep well sources is subjected to a multimedia filter and an iron-manganese filter.  This filtered water is then treated, using reverse osmosis and demineralizer.
Yeast
​​Only Saccharomyces cerevisiae is used in the fermentation process, without any other bacteria inoculant or type of yeast.

<
>
Fermentation
​The standard fermentation time runs for 27-30 hours to limit the production of any unwanted by-products/congeners that might affect the quality of the distilled ethyl alcohol.  Control of fermentation temperature is done using Plate Heat Exchanger, using water as the cooling medium.  Fermentation also occurs in close top fermenters, and CO2 is captured.
Distillation
Tanduay has a variety of distillates for barrel aging. “The majority of the rums filled into barrels are column distilled.  These “light” rums are purposely distilled at 95% [ABV] to reduce the congeners present, while maintaining the base sweet notes of molasses. We also have pot still rums which are distilled at 90% and below.  These [range from]  light (light esters, slightly oily, slightly green), medium (flavorful, slightly creamy, slightly sweet), to high ester (estery, sweet, fruity, slightly green), and are either blended with our light column distilled rums prior to ageing or allowed to mature in separate barrels,” said Tanduay Rum.

Stills are constructed and utilized based on production capacity, quality output, and energy optimization. The following columns are built in the distillery in
Batangas:*Tanduay also uses pot stills for some of their products.
Aging
Cask: Former bourbon casks made from American White Oak, with a No. 4 “Alligator” Char. “It is the interaction between the oak barrel and rum that impact the color, aroma, flavor and texture of the rum. We know that after two years the barrels have reduced the harshness of the alcohol, the spirits have developed a woody flavor while retaining the light character of molasses; at five years, subtle notes of vanilla and oak spices take over. For very old rums, tropical fruity flavors have developed with creamy and caramel notes.

During maturation, rums filled in barrels evaporate, which helps reduce the harsh profile, making the rum more rounded. Being in a tropical country, we have an annual evaporation rate (angel's share) of 5-7%. In latitudes where whisky is aged, evaporation is around 2% per year. So, a year of aging in the Philippines could be equal to 3 years of aging in Scotland.”

Filtering
Finishing
Caramel color is added to ensure consistency in color for each blending production. No sugar and glycerol are added to the Tanduay premium products.
Bottling
77,000 cases of rum are bottled daily. 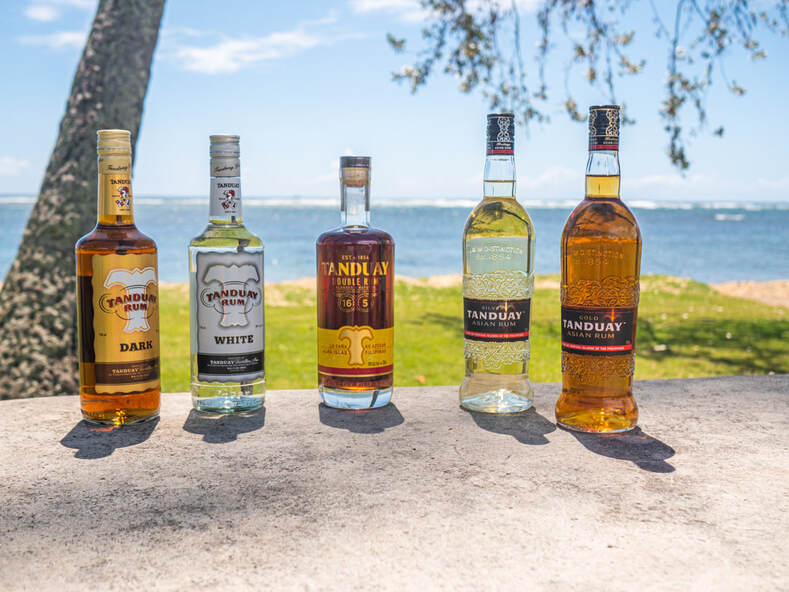 Up Next
Tanduay just launched its own hand sanitizer brand, named Alcogenix
A spiced rum brand will be launching this year.
New Boracay Rum flavors will be launched, with distinct ingredients originating from Asia.