Koolau Distillery
Koolau Distillery is in the “pursuit of purity” in whiskey making.  The newest distillery in the state of Hawaii is sandwiched between Kawainui Marsh and Maunawili on the lush Windward side of Oahu.  There, an American Whiskey is produced by blending Koolau Distillery’s own distillate, which contains a whiskey with a mash of 91% corn aged for one month and a four-year-old Kentucky Whiskey with a similar mash bill.  According to co-founder Ian Brooks, “We’re not here to make a company that we’re going to flip in three years. We want to stay here in the community, so that I can hand it off to my daughters.”
<
>
The company is family-owned and operated, and was founded by Marine Corps Lieutenant Colonels Eric Dill and Ian Brooks, who meet in 2002, Heather Pence, Mr. Brooks’ neighbor, and their spouses.  Both Dill and Brooks have been stationed on Oahu throughout their military careers, and have always wanted to return to live in Hawaii with the goal of starting a business in their retirement.

The idea of starting a distillery was born while Dill was on deployment in Iraq.  “I’ve always enjoyed whiskey, but we grew up in a time where you heard about moonshiners, but who actually knew how to do that?  I was in Iraq and read a story about some guys getting busted for making moonshine in their little housing unit. I was fascinated by it.  Like, Where did they learn how to do it? And what tradition from their family was passed down? I did some research on my own and found out that there was a way to do it on your own, but life got in the way.  A friend of mine called me when he was starting his own distillery, which rekindled my interest in distilling. I got to observe the nascent part of his distillery, the quick turnover, and his success and challenges with it.”

The idea of starting a distillery was further developed when Dill and Brookes attended a Department of Defense school together in Washington D.C.  Upon retirement from active duty, Brooks and his family moved back to Hawaii; that was when he met Dan and Heather Pence. After a discussion with the Pences, Heather joined the team, bringing to the table her valuable industry knowledge from her background in working for the local distributor, Johnson Brothers.

A couple years ago, Dill found himself back in Hawaii presenting information to the Special Operations Command Pacific. With everyone together, the team officially put their idea into action, securing a location for the distillery and buying equipment. 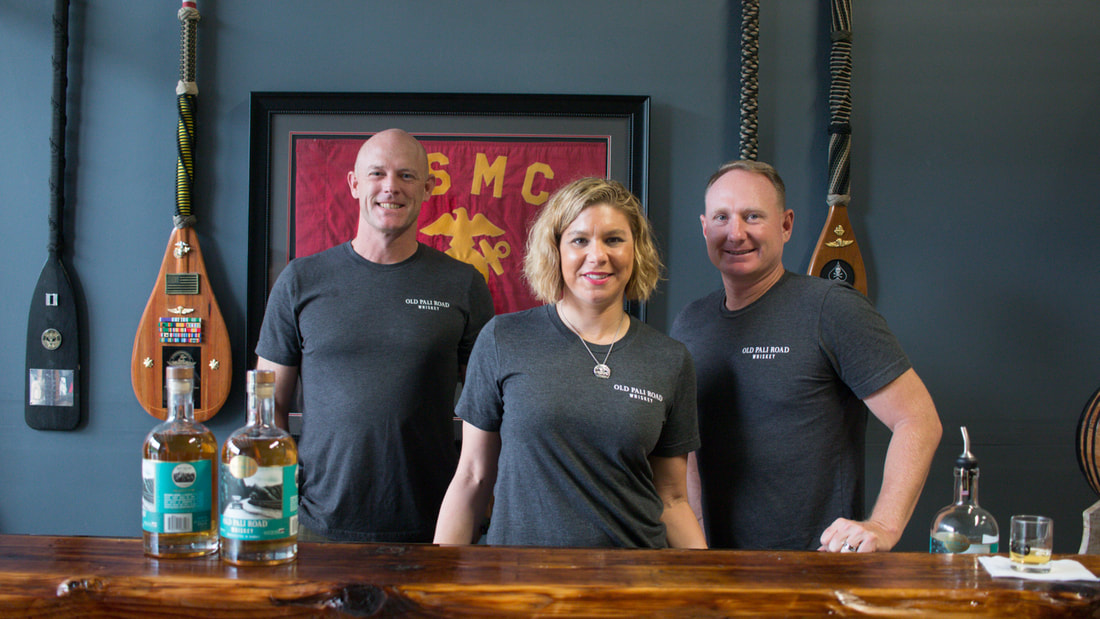 Ian Brooks; Eric Dill; and Heather Pence
<
>
According to Pence, “We picked the name Koolau because it’s where we live. When you look outside, for inspiration, it’s so magnificent and beautiful; you can't get better than that.”

The name of the whiskey, Old Pali Road, was the result of dozens of iterations of names and brainstorming sessions with Harris Agency, a marketing company. According to Dill, “In a brainstorming session, ‘Old Pali Road’ came up, and immediately everybody was like, ‘BAM! That’s it.’” The team chose the name because there is a lot of interesting history behind Old Pali Road. Dill explained, “For a long time, it was the connective artery between town and one side of the island to the other.  With Koolau Distillery being located in Kailua, and the flagship product being Old Pali Road, it is something that transcends the Koolaus. There is also something nostalgic about Old Pali Road, similar to the nostalgia that comes from good whiskeys that have various ages associated with them.”
According to Dill, “I have a passion for whiskey and it’s what I prefer to drink.  Making all spirits interest me, but I’m particularly interested in whiskey and the understanding behind bringing something to market without having to wait.  This comes through the blending process. Producing whiskey is also very much a challenge. Ian and I are goal-oriented people, and more precisely, we challenge oriented people.  It’s the reason why we joined the Marine Corps; it’s the reason we went into Recon and Special Operations.”

According to Brooks, “Eric is at the Special Operations Command Pacific.  We want to be challenged in retirement. For example, being in front of the still for 10 hours is a fight between me and the still to get the best stuff out of it.”
According to Dill, “What we’ve created here takes into account the climate.  When you’re sitting on your lanai or at a bar in Waikiki looking out over the water, what’s going to be more appropriate and taste the best in that particular moment? I’m also a big fan of Japanese whiskeys, and that has a lot of influence on the profile that we have constructed.  Most Japanese whiskeys are very clear. Part of our flavor profile is having a clean taste, and if you notice, it’s a pretty clear whiskey. ”

“And if you put the Hawaiian Flag on the bottle, like we did, it’s saying that it comes from Hawaii, so you have to produce quality, and you have go big. If not, most people will only support [the product] once,” said Brooks. 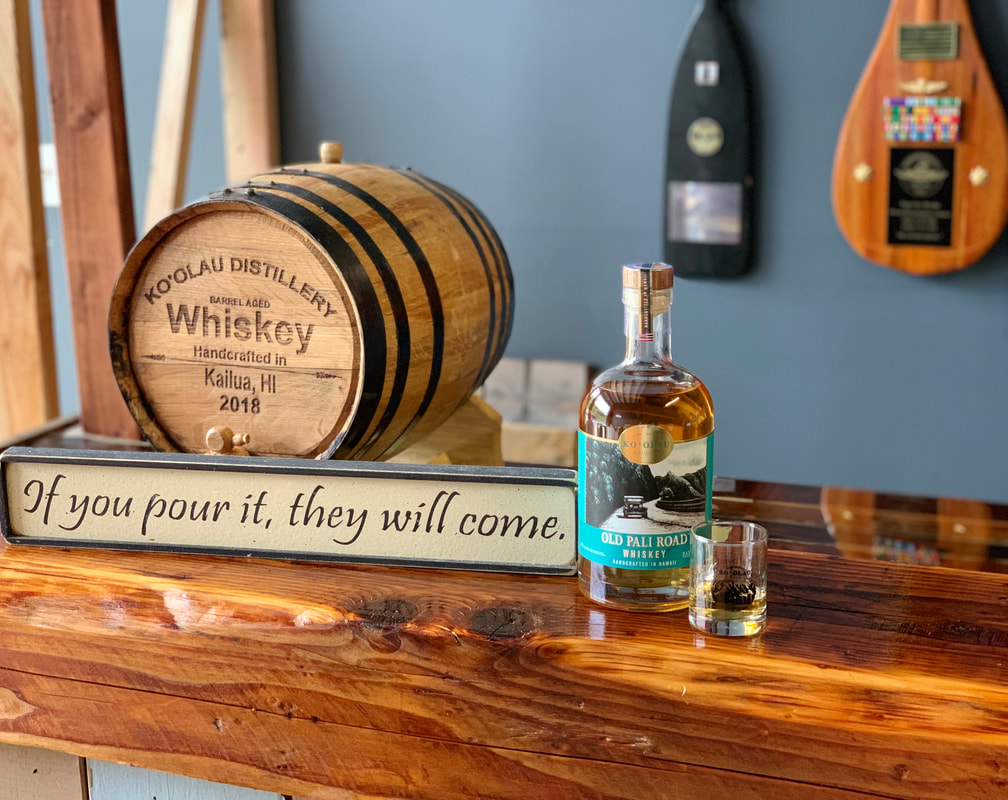 <
>
Mash
Bourbon style mash, with 90% Premium Corn and 10% Briess Distillers Malted Barley.
The malted barley primarily provides enzymes that digest sugar provided by the corn. “ We try to leverage two main enzymes:  one to break down the ends of sugar chains, and the other to break sugar chains in half in order to maximize the yeast’s effect to create the desired ethanol,” says Brooks. “We use as much locally-sourced corn as we can, but it’s seasonal.”
Four-Year-Old Kentucky Whiskey (used in in the blend)
91% corn mash bill.
“We wanted to find something that matched ours, so as we grow our content and our percentage of the whiskey, the profile of the whiskey won’t change,” explains Dill..

To find the whiskey, the team was assisted by a friend in the business and Google searches.  According to Dill, “A lot of people get their stuff from Indiana, obviously, but there’s a lot of other people out there who are willing to sell.  It’s because they’ve been in the business for a while, but they don’t want to deal with bottling anymore. Bottling is very time consuming. They still love to make whiskey, but they don’t like bottling or dealing with retail.  So, they make it for themselves, then sell you their barrels or their bulk. The people that run our software are a very successful distillery, and they invented the software to help run their distillery, and now they don’t even run their distillery. They just market their software.”
Yeast
Red Star Distillers Yeast.
Oahu Water
Oahu has a unique water source that draws from artesian wells that are supplied by water filtered for decades through lava rock.   According to Dill, “Water is the star here. Our water is absolutely superior. We only remove sediment as well as the chlorine and fluoride that have been added post rainfall.
<
>
Fermentation
Koolau Distillers ferments their mash for seven to ten days. There is a challenge to fermenting whiskey in Hawaii.  Brooks explains, “We’re always fighting the heat in fermentation and distillation. When it’s 95-plus degrees in this building during the summer time, the yeast will shut down.  We have an air-conditioned chamber, and the vessels get put in there to maintain the exact temperature we want.”

Spent Grain
The solids are strained from the mash through straining bags, and the spent grain is used by Dan and Heather’s daughter to make dog biscuits.  Le Jardin Academy, a local private school located near the distillery, also has an animal center that uses the spent grain as animal feed.

Distilling
In a distillation run, there are heads, hearts and tails.  Koolau Distillers puts an emphasis on collecting hearts between 110 proof and 160 proof, which they believe are the cleanest and purest.  Also, because they have a smaller still, the hearts, heads and tails are more defined than at a larger distillery where they can blend together.

According to Brooks, “[distilling is] very simple, but it’s not easy. There’s must be art and a craft to it in order to capture the quality.”

Koolau Distillery also is conscious of the resources they use.  Instead of tapping a waterline for temperature regulation of the still, which can consume hundreds of gallons of water per distillation run, they uses a hydrostatic radiator, which consumes no water.
​
Aging
One month, though some barrels are aged for longer.

Koolau Distillery is able to age whiskey faster than its mainland counterparts due to a unique combination of factors.  Firstly, the building’s temperature fluctuates greatly due to the building’s metal fabrication. This helps the whisky permeate into the wood. Secondly, due to the hotter than average temperature in Hawaii compared to other whiskey-producing regions, there is a faster aging time.  Finally, aging is accelerated by the usage of five- gallon casks, which expose the whiskey to more surface area than in a larger cask. According to Brooks, “The first time we dumped a barrel and tasted what we made it, it was darker than the stuff we got from the mainland, which is aged for four years.”

Although they are currently using a five-gallon cask, Koolau Distillery will be moving to a 10-gallon cask shortly.  “When we switch to the 10-gallon, we are going to switch to a manufacturer from Wisconsin. They do custom charring, and we want to get good caramel and flavor that is not overly colored.  I love Japanese whiskey and I love bourbon, so one of the things I’m making is something that traverses the two. You can get a light toast and a heavy char, so that’s what we are going to switch to when we have the purchasing power to do so.

Editor's Note
All barrels are casks, but not all casks are barrels. Rather, a “barrel” is a specific term referring to a 50 to 53 gallon cask often made of white oak.  For the all-encompassing term for the vessel that you age spirits in, “cask” is the preferred nomenclature.
Future Projects
Koolau Distillers is actively figuring out the logistics to make a whiskey out of 100% Oahu-grown corn.  They already buy corn at Oahu farmers’ markets.

According to Dill, “I’ve thought about doing five-gallon batches of a 100% run, instead of running the whole still. I could get enough corn to do a small batch to set aside, and then pull it out to taste at 6-months or a year to see if it’s a marketable product.  When I get to the point where I’m not working another job, I’m going to do a lot of experimentation like that. While I’m very happy with this, it’s a pursuit of purity.”